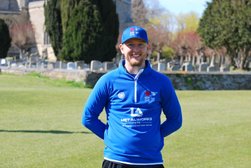 Potters Bar managed to beat old foes Welwyn Garden City in a tense battle at The Walk on Saturday and remain 27 points clear at the top of the table.

The toss was won by Daniel Blacktopp and the visitors to decided to bat on a pitch that would spin and the initial sparring saw an even contest as the Welwyn openers found the boundary a few times, albeit through third man. Thilan Walallawita got the breakthrough, a leg before which had a hint of bat about it but it was given and 20 for 1 saw Mo Rizvi enter the fray.

Both Welwyn batters got in and batted nicely as Bar looked short on ideas as they struck some lovely boundaries and put on 50 in 77 balls as the visitors started to look in a really strong position. Bar went all spin at this point and Anmol Maheshram got a breakthrough as Rizvi tried to clear mid off and remarkably Reece Hussain ran and held a fine catch.

This now brought in the leagues best batter for the last god knows how many years and remarkably Owais Shah clothed a full bunger straight to Jigar Mehta at mid on and the great man was gone first ball. 90 for 1 was now 90 for 3 and Bar were back in the room. This now brought in skipper Dan Blacktopp and and he Dylan van der Westhuizen batted positively towards the lunch interval. However in the last over before the lunchbreak, Blacktopp ventured down the wicket half blocked it and was stumped in the process.

138 for 4 at lunch and Bar grabbed the game by the neck after the break as James Scott ran amok. Four balls after the break he bowled van der Westhuizen for a fine 59 and next over Lee Tyrrell took his first wicket in his first league game back as he had Andy Nolan leg before for just 4. Eight balls later James Scott had Aidan Watterson leg before and when Tom Cushion chipped to mid-wicket for 5, Welwyn had gone from 138 for 3 to 155 for 8 in just 23 balls.

To the hosts credit, Zaid Faleel batted nicely and showed no signs on losing his wicket and he ended on 31 as Kapil Dave chipped to mid-off for 5 and Tom Whitton edged to slip to leave Welwyn all out for 188, leaving Bar a massive 67 overs to chase the runs down in. The Bar bowling was dominated by the spin department as James Scott took PB best bowling figures of 5 for 25, Anmol Maheshram 3 for 40 and a wicket a peice for Thilan Walallawita and Lee Tyrrell.

So 189 to win on a pitch taking spin saw Bar lose a wicket early as Watterson found the edge of James Seward's bat for just 3 and when Reece Hussain was badly dropped at cover on 1, the target looked a long way off. Josh Matthews and Reece Hussain batted positively however and found the boundary as runs started to flow.

As the visitors were looking like a beaten team they got the wicket of Reece Hussain as Tom Whitton had him well taken at cover by Andy Nolan for 23 and 49 for 2 saw Bar needing another 140. In strode Rishi Patel and he looked in fine touch and in truth made batting look remarkably easy.

He hit 6 fours and a six as he eased Bar to 100 as he and Josh Matthews who also looked in good touch reached a 50 partnership in 54 balls . Josh Matthews however lost his wicket as he tried a scoop and was bowled for 40 to leave Bar 117 for 3 and when Charlie Scott was adjudged leg before for 3, Bar were being asked big questions at 128 for 4 needing 61.

Still Rishi Patel batted on nicely and completed his 50 in 41 balls and he and Steve Gale in effect took the sting out of the attack and the visitors as the target was down to a bakers dozen.

Rishi Patel was given out caught behind as he was trying to reverse sweep Kapil Dave and went for a brilliant 86 from 85 balls and when Steve Gale snicked behind for 13 Bar were 6 down still needing 12 but Lee Tyrrell and James Scott kept their nerve and saw Bar home to a 7th straight win in all competitions and just 2 defeats in 17 games this year.

Next week sees Bar take on Totteridge Millhillians in the final red ball game of the season and the following day they take on Hornchurch in the Regional T20 competition.