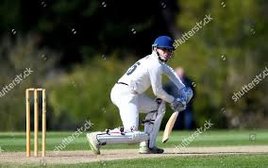 TWO RECORDS CRASH BUT SO DOES WINNING RUN

A memorable day with the bat for Bar but they leave North London with a winning draw that keeps them top of the table but their lead has been cut to 16 points.

Skipper Luke Chapman called right and had no hesitation on batting first on a ground that looked full of runs.

Bar got off to a steady start as the hosts bowled in some good areas and the early exchanges saw the odd boundary immersed in dot balls as the pumped up hosts chasing a playoff place were rightly up for the game. Josh Matthews cleared the ropes for the second time in his innings, which saw a ball lost and with the replacement, the very next ball saw his off stump clattered to a fine yorker from Joe Wray.

That for 46.3 overs was as good as it got for the hosts. James Seward and Reece Hussain slowly started to accumulate and it was a common thing to see a boundary an over as the pair looked in little trouble and had completed a 50 partnership in 77 balls. Two overs later the 100 arrived and James Seward's 50 and despite a drop at slip before the break, Bar went into the excellent lasagne at 117 for 1 off 30 overs.

After lunch both James Seward and Reece Hussain batted beautifully. It seemed every three overs, milestones were being congratulated. The 100 partnership came up in 139 balls and next over Reece Hussain completed his 50 in 69 balls. It was common that overs were going at 8's and 9 an over as the hosts started to wilt in the increasing heat and on an outfield that was baked to its limit, made ground fielding as tough as it gets.

James Seward got a life on 78 as he was badly dropped at deep square leg that was shovelled over the boundary for 6 and that brought up the 150 partnership in 190 balls and from that moment on he went into turbo boost.

James Seward completed his second hundred of the summer in 144 balls and at this point Reece Hussain was just happy to rotate the strike and aim for an unbeaten 100. 232 for 1 off 47 overs saw the onslaught get increased as Bar batted as positively as I've seen for a good long while and Totteridge had no answer for it as hard as they tried.

James Seward scored 74 in just 36 balls as he sailed past the previous highest score in a 1st team league game in modern times (169 by Tim Phillips at Farnham Royal in 2009) and ended caught at long on for 184. It came off 180 balls, hitting 10 maximums and 19 fours, a truly wonderful innings. It seems almost insignificant that Reece Hussain completed his 100 off 123 balls, his third of the summer. He ended unbeaten on 111* which now leaves him on 819 runs for the season at over 100. Bar ended 342 for 2 from 57 overs, leaving the losing draw out of the possible results as Totteridge had 58 overs to try and get them. That wasn't the only record smashed as the 300 put on between James and Reece surpassed the 275 put on between Mike Palmer and Patrick Brown in 2004 against Banbury.

The hosts got off to a good start, although a couple went through the slip cordon, Ben Howgego looked in fine touch as he struck four boundaries in the opening exchanges. He lost his opening partner Jordan Bethel leg before to Jigar Mehta at 1 for 35 and this brought in the overseas pro who batted wonderfully well in the first game and scored a fine hundred. He started like a house on fire, played some wonderful shots all round the wicket and he and Ben Howgego were shaking hands on a 50 partnership in 44 balls as the run rate was over 6 and up with the target.

As tea neared however Bar got a desperately needed breakthrough and it took a worldie of a catch at midwicket by Luke Chapman as Lee Tyrrell got Madushan for 47. The hosts went into tea sat pretty on 113 for 2 needing 230 off a minimum of 37 overs. A tall old ask but in the past they chased 346 and ended 4 short the last time the two sides clashed at Totteridge.

Howgego and skipper Miles batted nicely after the break as Bar didn't really look like taking a wicket. Howgego brought up his 50 in 69 balls as the pair just rotated the strike. They brought up a 50 stand in 75 balls but next over Ben Howgego's innings was at an end as he was taken by skipper Luke Chapman off the bowling of Anmol Maheshram.

This brought in Simon Webster and he and Miles continued to bat well and both batted well and the 200 arrived at the 39 over stage and this meant 143 off 19 overs with 7 wickets in the hutch - game on and Bar were short on answers. The last hour (17 overs) arrived with Totteridge needing 133 with 2 set batters. 24 runs in the next three overs saw Jon Miles complete his 50 in 80 balls and when he cleared the ropes with the last ball of the 45th over saw the target down to 95 off 78 balls.

Then the game swung back towards Bar as Miles drilled one to point where Charlie Scott held the catch. Shaun O'Brien snicked behind second ball and when Sam Smith was bowled third ball by Luke Chapman the chase was effectively over. The hosts had lost 3 for 1 in 7 balls. With that the interest in winning and on a flat pitch and Simon Webster looking as if he was batting with a sheet of ply the game drifted and no matter what Bar did to try and get a toe in, the hosts snuffed it out.

So Bar leave N20 with 19 points and with Radlett winning the lead has been reduced to 16 points. The timed games are now done, Bar took 247 points out of a maximum 270 and 7 wins and 2 winning draws is a stunning effort. However now it's down to win or lose cricket and Bar whilst its still in their hands, its far from a cut and dried finish.