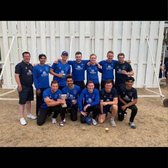 BAR WIN THE HERTS T20 CUP FOR THE SECOND TIME

Potters Bar won the Herts T20 cup for the second time in 4 years in a wonderful game of cricket at Hertford on Sunday.

Hoddesdon fresh from an amazing victory over Radlett won the toss and batted first and got off to a flier thanks to James Curtis who bulldozed three fours and a six and along with Jayden Broodryk made batting look pretty easy on a surface which was now starting to spin.

The first 6 over powerplay saw Hoddy 47 for 0 and the pair had put on 50 in 39 balls and were looking in a really strong position. However Bar got a breakthrough as Curtis was stumped by James Seward off of Anmol Maheshram for 31 and at 53 for 1, Bar were back in the room. Or at least they thought they might.

In came long awaited South African pro Cameroon Shekleton, who along with Jayden Broodryk, constantly kept the scoreboard ticking as dot balls were a rarity as Bar looked short on ideas of how to break the partnership. They put in 50 in 32 balls as the 100 came up in the 13th over and Hoddesdon were staring down the barrel of a large defendable total.

Broodryk brought up a fine 50 in 38 balls with a towering maximum over the short boundary and when Jigar Mehta went for 20 in the 15th overt, taking the score past 130 it was looking like a lights out day for Bar.

It took Steve Gale to come on and get the wicket of Broodryk for a fantastic 83 off 53 balls as he held out to long on and then next ball Sturdy was run out by good work at long on again by Anmol Maheshram. Shekleton batted on and finished unbeaten 46 but importantly Hoddesdon hit just 1 boundary in the last 18 balls and that kept their score down to 167 for 4 from their allocation.

A special word for 18 year old Ashish Padki who I thought was the pick of the bowlers who took 0-28 from his 4 overs but bowled at periods where Hoddesdon were at their most potent.

So 168 to win and Bar got off to another poor start as Josh Matthews toe ended one to extra cover for 0 and at 1 for 1 saw Reece Hussain join Steve Gale. The pair got Bar back on track with steady start but 19 came in the 4th over but that saw the end of Reece Hussain for 23 as he was caught by Todd Sturdy.

This brought in Charlie Scott and this is where the game changed. He and Steve Gale batted brilliantly. Charlie Scott struck his first two balls to the boundary and with that Bar stepped on the accelerator and the pair put on 50 in just 26 balls and when Charlie Scott brought up his 50 in 29 balls, Bar had the game won at 120 for 2 with 7 overs left needing 48 off 42 balls.

To Hoddy's credit, they didn't go down with a whimper as Steve Gale was well pouched at deep square for 49. The pair had put on 95 in 61 balls. Next over James Scott inside edged through to Shekleton for 5 and when Charlie Scott had been caught for 55, Bar started to panic a bit at 5 for 138 needing 30 off 27.

Pat Scott ran past one on 10 and Lee Tyrrell was expertly taken at long on for just 3 as it was real squeaky bum time at 156 for 7 - needing 12 off 7. James Seward was joined by Anmol Maheshram and needing 11 off the final 6 balls it was arguably money on Hoddesdon.

James Seward nicked a single on ball one and Anmol Maheshram played a wonderful inside out shot over extra cover, one bounce for 4 and then helicoptered a shot through midwicket for a single, leaving 5 off 3. James Seward then glanced a tired Matt Varner delivery past short fine leg for 4 and a scrambled leg bye saw Bar home.

A wonderful game between two decent teams of which both can be proud of their efforts. To Hertford CC we thank you for your hospitality and Bar are once again Herts T20 Champions. They now go on to the Regional section which we are told will be at Hornchurch CC on Sunday 7th August 2022 and more will follow on that.

Well done fellas and leg one of a treble is up.