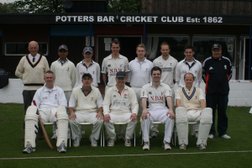 How low can you go?

Potters Bar 2nd XI slumped to a disappointing defeat to their second XI counterparts at Knebworth Park. Without at least 7 regular players Greg Hodgeâ€™s men travelled to Knebworth Park to play a fixture on their second ground due to the leagues fixture computer putting both of Knebowrthâ€™s top teams at home.

Hodge lost the toss and was asked to bat first on a green wet wicket. With regular opener Mike Palmer making his way back from a colts game in Regents Park, Tom Pett opened with his uncle Dave. Bar got off to a solid start with the leg byes column doing overtime as the ball failed to bounce above shin height. Three times Bar picked up four leg byes off young Tomâ€™s pads, in truth he only needed to be wearing football shin guards.

Tom stroked a few boundaries but like on many occasions this season was out bowled trying to drive a straight ball. His dismissal brought young Adam Titmuss to the crease who timed the ball magnificently from ball one. Dave Pett fell to a well bowled Yorker and by this time Palmer had arrived to bat at number four.

Titmuss and Palmer were the only batsman in Barâ€™s innings to look comfortable at the wicket, where backfoot shots were impossible. The pair took Bar past the 100 mark and Titmuss brought up an excellent 50. Sadly a rush of blood saw him bowled for 52, but added to the 46 he scored against Cockfosters the 16 year-old now has 98 in two knocks in the second team. After Titmuss fell none of Barâ€™s batsman managed to get in, Palmer fell for 42 and whilst Bar could of hoped for a score of 200+ they ended up being bowled out for 191 in the last over, with Knebworthâ€™s Kyle Dix picking up 4 for 31 and old timer Graham Fisher finishing with figures of 3 for 35 from 20 overs.

Without leading wicket taker Chris Boyce, Bar opened the bowling with Greg Hodge and Alex Whitehouse, a few balls found the edge but Bar were unable to find the same channels as their Knebworth counter parts. Straight bowling was essential in the low bouncing conditions, although the wicket was becoming more favourable to the batsman. Whitehouse was replaced by Tom Rowlands who bowled three probing overs and Hodge replaced himself with Dan Brown. The introduction of Luke Owers from the bottom end saw things tighten up.

Bar finally got their first wicket when Brown bowled opener Sergeant for 34, then after the drinks break Bar managed to turn things around. Firstly Letford clipper Owers to midwicket where Hodge held his 8th catch of the season then in the next over Brown removed Barlett-Tasker for 0. With 20 overs remaining Knebworth needed 100 with 7 wickets in hand.

From here Bar lost their way a little, Alex Richmond, a man who had scored just 22 runs in his previous 6 league knocks, was dropped on 0 off Owers, he was to go on and make 47 not out and help win the game. Bar also dropped skipper Robinson in the 30â€™s, he went on to make 60 not out. With Brown starting to tire the scoring rate crept up and the Bar drifted away from Bar. Brown bowled 12 overs 2 for 25 and was the only bowler that really offered any solid control. In the end Knebworth won at a canter with two and a half overs to spare. Bar were left disappointed although the young players in the side making some of their first second team appearances would have gained a lot from the experience.

After the game skipper Hodge said: â€œIt is a disappointing day and I donâ€™t want to blame the ground as it is not Knebworthâ€™s fault, but it is a shame to play division 2 cricket in this environment. I think we got the rougher end of conditions and the wicket became harder to get people out on as the game went on. That said we didnâ€™t bowl straight enough and our fielding was poor for a young side. Adamâ€™s knock is a massive bonus for us and if he carries on timing the ball like that he will have a good future in the game.â€