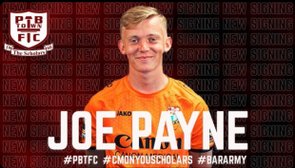 A Payne for All Wingers - Joe Payne is a Scholar

The Left Back Joins the Scholars

We are delighted to announce the signing of Joe Payne from Enfield Town.

The left back has experience in the EFL, having made his EFL debut for Barnet against Stevenage in 2018. He went on to make 3 appearances in League 2.

The defender has the capacity to shoot from distance, scoring from just inside the opposition half in a Middlesex FA Senior Cup Challenge match. He has also scored some superb volleys in his career.

The versatile 21-year-old has played at left back and in left midfield but has the capacity to fill in as a centre back, proving his worth to boss Lee O’Leary across the pitch.

Payne made 35 appearances for Enfield last season, scoring twice. The experience that Payne has despite his age will be of great use to Bar throughout the 2020/21 season.

A set piece specialist, Payne has featured in an F2 Academy video which shows the incredible accuracy of his free kicks. Payne is a player who can leave a huge impact on the outcome of matches at both ends of the pitch.

A product of Wormley Rovers’ youth teams, Payne is a local player who will no doubt settle into our new look squad well. Having joined from Enfield, Payne will have a good understanding of our local derbies with Cheshunt, his former club and most importantly, Wingate.

We are delighted to have acquired such a talented player, which further shows the intentions of the club to push on and better our 13th placed ‘finish’ last season before the termination of the season.

We cannot wait for the season to get underway, especially with the services of Payne who is sure to improve us defensively. It is an exciting time for us, and we are excited to see where this team can take us this season!