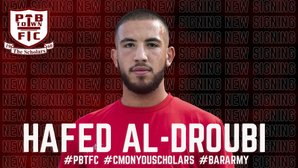 We are delighted to announce the signing of goalkeeper Hafed Al-Droubi as our first addition to the side for the 2021/22 season!

Hafed began his career in Turkey, having played for Turkish side Besiktas at Under 19 level. He has also played for Fulham and Luton Town in the UK, as well as Manchester 62 in Gibraltar. Despite only being 26 years of age, Hafed brings a wealth of experience to the Scholars, having had experience playing across Europe.

The last club our new keeper played for was Northwood FC, and will now be the first to join our current squad of players for the upcoming campaign, which you can read about here.

Our new goalkeeper’s personality is clear in his interview that he did with Rising Ballers last year, as the shot-stopper described how he believed the lockdown was a good opportunity to “Think about the things that you’ve done right, the things that you’ve done wrong and what you could improve on”. Al-Droubi’s determination to improve and succeed will be sure to motivate the players, and hopefully allow the club to hit new heights in the Isthmian Premier League.

Hafed will be welcomed to the LA Construction Stadium next season as a valuable asset to the side, and we look forward to seeing him feature for Bar very soon!