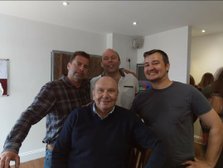 With great sadness, I have to inform you that Bob Martin passed away late on Tuesday evening, after being admitted to hospital in the afternoon. He was 73.

I have not yet been informed of the cause, though Covid has not been mentioned. He had been in hospital a month ago, for a heart problem, but he had improved.

Bob came to the Club in 1996, when Andy, his son, joined us and from then he was a regular visitor, also coming to many away games over the years.

He was one of those 'unsung' and most courteous of members, who always volunteered to help on a match day and at events, and around the ground, his trade mark being maintaining the ground.

His dedication was rewarded in 2015, when he was awarded the prestigious Clubman of the year Award for his contribution over many years.

He was generous to the Club, whenever a fund raising scheme was launched, but understood the hardship at Clubs.

He also spent over 50 years at Southgate County FC and we were delighted to allow him to share our facilities with them, when they celebrated their centenary in 2011.

We send our most sincere sympathies to Andy and all of Bob's family.

Bob will be missed and will not be forgotten and we will recognise his service, as soon as is possible.