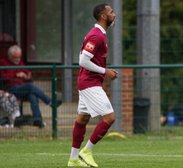 Potters Bar Town 1-0 Bowers & Pitsea: A late goal from the number nine on his home debut was enough to seal the win.

Nick Dembele introduced himself to Potters Bar fans with a late winner to give Bar three valuable points in a tight clash against Bowers & Pitsea.

It was a tough match for The Scholars who were without Frazer Shaw and Miles Mitchell-Nelson, but the hosts showed character to find a way to win having been frustrated for large spells in the tie.

Bar’s new star striker managed to squeeze his shot in with six minutes of normal time to play.

The result leaves Sammy Moore’s side top of the Isthmian Premier Division.

Story of the match

Dejon Noel-Williams tried to cross the ball into the box early on, but it was sent behind for a corner which came to nothing.

Kasim Aidoo aimed a cross to Tyler Christian-Law in Bar’s first big chance of the game, but it was just too high for the number 10.

Oscar Shelvey had a shot from the edge of the box for the visitors, but it was blocked.

Adam Martin played well to marshal Emmanuel Oluwasemo away from the ball, which went back to Ted Collins to claim.

Collins could not get his hands on a cross, but it went behind for a goal kick luckily for the Scholars.

Jacques Kpohomouh made a superb recovery challenge to prevent Bowers from racing in on goal.

Jamal Allen had a chance to give the visitors the lead, but he headed wide.

Collins made an important stop with his feet to spare Martin’s blushes after he failed to control the ball.

Oluwasemo was in on goal around the half an hour mark, but a strong hand from Collins denied him access to an empty net.

Finlay Titchmarsh played a good ball into Noel-Williams, but the striker was hounded out and the end result was a throw in which was cleared.

The ball was floated into Noel-Williams in added time of the first half, but it was caught by Kie Plumley.

It was goalless at the break in a match that had not seen many chances for either side.

Bar had tried to provide service to Noel-Williams and Dembele but had not been able to make the breakthrough.

Collins had a good half to ensure The Scholars went into the interval level also.

A nasty clash of heads to start the second half saw Rudy Allen booked for the hosts.

Dembele had his first sight of goal from the edge of the area, but his effort was blocked.

A corner Bar had could not be met by a player in a Maroon shirt, but The Scholars had started the half with more purpose and intent.

Titchmarsh found himself in space to get the ball into the box, but his cross was just too high for anyone to connect with.

Dembele had a free kick in shooting range as the game approached the hour mark, but he fired over.

Noel-Williams looked to go for goal inside the box, but he was crowded out just as he looked to pull the trigger, denying him a good opening.

Collins’ direct pass which looped over the visitors’ defence found Aidoo, but he just failed to get the ball under control which would have seen the winger in on goal.

At the other end, Bowers attempted to stage a counter attack, but there was nobody there to meet the final ball.

Quentin Monville knocked down a perfectly weighted pass from Titchmarsh into the danger zone as Bar continued to probe for an opener, but the pass was intercepted by Plumley.

The ball did then find Dembele from a cross, but his header was glanced wide of the target.
With 24 minutes to play Mo Kamara was introduced for Noel-Williams, and the midfielder soon set about creating chances for the hosts.

A throw in which was launched into the box was flicked onto the roof of the net as time began to trickle away from The Scholars.

Plumley had to be alert to claw the ball away from Monville as he looked to pounce on a loose back pass.

The former Bowers player was then on hand to win a foul well after winning back possession and drawing a free kick soon after.

Christian-Law thought he was in on goal and saw his shot saved, but the flag was raised against him anyway.

The final ten minutes was more end-to-end, as both sides looked to search for a winner.
It was Dembele that provided the crucial moment in the 84th minute.

He found himself in space on the right-hand side and fired his effort goalward, which Plumley got a hand on but the ball still bounced into the back of the net.

It was Dembele’s first goal at the Lantern Stadium, he has now scored three goals in as many games for The Scholars.

A wonderful passing move found Christian-Law as Bar looked to seal the deal in added time, but he could not quite control it.

Collins claimed a cross well late on, and in a final nervy moment the ball flashed across the face of the host’s goal and went behind for a goal kick.

Full time secured a vital win for Bar, who had managed to find a way to take the three points despite not being at their best.