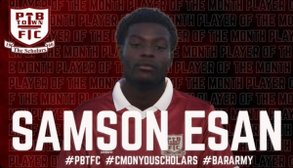 Esan Wins Supporters Club Player of the Month for September

A Superb Start for Samson!

New signing Samson Esan has won the Supporters Club Player of the Month for September. The 22-year-old who signed from Enfield Town in the summer was originally signed as an U23 player, however he impressed O’Leary and the coaching side so much that he earned a place in his side towards the end of September.

Esan beat the three other nominees Burbridge, Ward-Cochrane and Cole, who also impressed in September.

Esan made his first appearance as a substitute in a 3-0 defeat to Carshalton, but also came off the bench in Bar’s 1-0 victory in the FA Cup against East Thurrock.

It first became apparent that Esan could leave an impact on the team when he came on for Bar against Corinthian Casuals. Despite losing the game 2-1, Esan scored his first competitive goal for the club almost straight after coming on and had a huge impact in allowing the Scholars to attack quickly.

Esan was handed his first start in our last home league game of the month against Cheshunt. The Ambers approached the game with an unbeaten run and Bar had not yet won a point, but Bar prevailed on the day with an emphatic 3-0 win, which Esan was influential in. Ward-Cochrane and Kyei ran riot on the day, which was clearly helped massively by Esan providing them a new burst of pace as well as allowing the other two attackers more space to occupy.

Esan had a very impressive September for the Maroons and having had an even larger impact on the team at the start of October, there is plenty of excitement around the club about just what Esan can achieve with Bar.