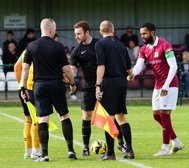 Potters Bar Town 1-1 Cray Wanderers Bar could not quite find the opening to win the match despite a dominant second half.

The Scholars opened brightly with Finlay Titchmarsh operating down the right with a dangerous cross that was eventually claimed by Shaun Rowley eventually claiming the ball loose ball. Moments later Dejon Noel -William’s effort was blocked.

Cray responded with Nyren Clunis breaking into the box only to be denied by a fine saving tackle from Rudy Allen before he could get a shot away.

A stray back pass from a Cay defender almost embarrassed Rowley as he watched the ball trickle past his right hand post.

Moments later Quentin Monville crossed from the right but Lewis Manor’s header struck the crossbar and flew over for a goal kick.

The breakthrough came in the sixteenth minute . A Monville corner looked to have been dealt with by the visitors defence but he ball fell to Mo Kamara , his vicious volley flew into the net leaving the keeper and covering defenders stranded.

Cray responded well and were level just five minutes later as a corner from the right was scrambled away only to be played back into the box to find two Wanders players in space with Mitch Chapman tucking away the equaliser with the Bar players looking for an offside flag that never came.

The Scholars responded with Noel - Williams getting free in a wide area of the penalty box but could only pull his shot wide.

The second half saw Bar lay siege to the visitors goal for long periods but failing to take advantage.

Straight from the off a Finlay Titchmarsh effort was blocked with the home side players demanding a penalty.

Nyren Clunis could have put Cray ahead but pulled a shot wide of the post.

The Cray goal led a charmed life on the hour ; Tyler Christian – Law had a shot blocked , Noel-Williams hit the bar and a Titchmarsh effort was scrambled away.

Noel -Williams should have given the home side the lead. Freed by a Manor header he scuffed his shot straight into the arms of a relieved Rowley as Cray were happy to go home with a point.