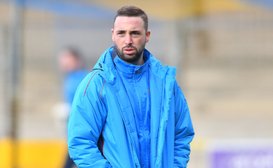 Former Hemel Hempstead boss Sammy Moore is back in management with Potters Bar Town, as the club show its intent and desire for success.

“The club wanted to show its intent for success and desire for attractive football. Sammy is the perfect fit. He has a clear pedigree for success and wants to win. We are a Family club that do things right, something that attracted Sammy to the club. I can’t wait to start this new chapter in our history. We all welcome Sammy and his young family to the club.”

Sammy’s reign at National South Hemel saw him take them to a few points off the playoffs, before leaving the club. Moore also had a successful spell at Concord Rangers, but stepped down due to ongoing personal problems, just days after taking the Beachboys into the National League South play-offs, although they could not compete in them, after failing ground grading requirements.

Moore also impressed in the hot seat at Leatherhead, again taking the Isthmian Premier club to the playoffs & 2nd round of the FA Cup. His success at Leatherhead got him the move to National League South Club Concord Rangers.

Success is clearly in his DNA, as Sammy Moore is a former English professional footballer. He made his league debut for Ipswich Town at the age of 19. He went on to play for both Brentford and Stevenage for short spells before signing for non-league Dover Athletic, with whom he remained for two seasons. Dover Athletic proved unable to offer Moore his demands for full-time football and he moved to Conference side AFC Wimbledon. At the end of AFC Wimbledon's first season in League Two, Moore was voted Player of the Year 2011–12 by "Dons" fans. His contract was not renewed at the end of the 2014–15 season, and he subsequently signed for League Two side Leyton Orient.

Welcome to the Scholars!