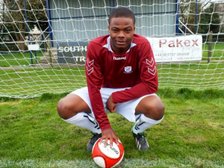 Potters Bar Town FC would like to congratulate Dipo Akinyemi on signing a professional contract with Stevenage Borough FC last week. Dipo joined Stevenage's academy as a scholar half way through last season, after impressing many scouts watching PBT's under u18s and u21s. Dipo’s attacking strength and skilful dribbling was always going to be a great asset to have in any side.

Dipo joined Potters Bar Town from Sunday Park football in 2011. He impressed our Youth Manager, John Gibbs, with his strength and although it was park football, he could see he had a talent that would be an asset to our squad. His great finishing and turn of pace played a big part in knocking out full time academy sides two seasons running in the FA Youth Cup. Dipo also turned in great performances in the Ryman Youth League, including scoring a hat trick, away at Staines Town FC in our 5-1 win.

"Dipo deserves to be where he is with his determination and character to keep going, even when things don't go his way. Breaking his ankle a season ago would have put most players off football, however, Dipo came back even stronger.".

John went on to say that he uses Dipo's commitment and work ethic, on and off the pitch, as an example to our other players, as he would catch two different buses to training, twice a week, and another journey on match days. He rarely missed training and never missed a match, and his positive attitude gave a good atmosphere in the changing room, and aside from football, Dipo was a great person to have around.

John Gibbs would also like to acknowledge the fantastic coaching and support Micky Mafunga, and more recently Ollie Morah, has given to Dipo and all our Youth players. Some of these are now playing at a higher level due to Mickey and Ollie's passion for developing good footballers and playing "the right way".