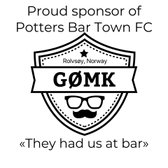 Our Norway based supporters club

Our Scandinavian supporters club is called GØMK, and is a local beer club based in Rolvsøy, a village an hour away from Oslo.

The Facebook group: 'Potters Bar Town F.C. Norwegian Supporter Club' boasts over 30 fans, having only been created in May.

The founder of the Facebook page Marius Raae said: "It all started with a friend's group that wanted to do something together on a regular basis. So we started a beer club called GØMK - which means boys beer food club.

"At the last meeting some of us had the idea of having a team or club to support, and maybe helping with some small donations as sponsors.

"Two guys were tasked with finding a club, Jørgen Fog and Svein Rostad. They had to find a club that we can travel to easily, isn't that known in Norway and not one that could interfere with teams we individually were supporters of."

Marius added: "It did not take that long before Fog found Potters Bar Town FC. The first thing that we said was - they had us at Bar."

The supporters group have also become Home Shorts sponsors of the Isthmian Premier League side.

"We have just ordered around 25 Potters Bar shirts from club secretary Jeff Barnes at Potters Bar Town FC and are now signing a sponsorship deal.

"Now the job of booking and planning the trip over to England begins. We are waiting for the fixtures to come out, and then the booking will begin. The trip will take place in November I think.

"The plan for the future is to support the club and have a home in Potters Bar.

"Jeff Barnes has been a great sport and helped us, so we hope that we can make something fun and long lasting happen."