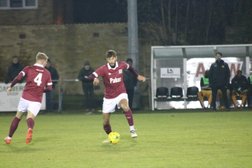 Bishop’s Stortford suffered a scrappy 1-0 defeat away to Potters Bar Town on Saturday.

Without a win in the New Year, the Blues travelled to a wet and windy Pakex stadium and – after a pitch inspection – played out a low quality affair with George Nicholas’ early goal the match winner.

Jack Thomas captained the side in his 101st Blues appearance, in the absence of Ryan Henshaw who sustained an injury in a friendly against Enfield on Tuesday.

Ben Ward-Cochrane – scorer in the 4-1 win for the Scholars in the reverse fixture in October – had the first chance of the match, attempting to volley at goal he didn’t make a clean contact on the ball and it was an easy save for Fred Burbidge.

David Manu’s deflected shot at the other end trickled through to R’avan Constable, with both Jamie Cureton and Shomari Barnwell waiting for a pass.

The goal came moments after, with the Blues failing to clear from a corner, Nicholas struck through a crowd of bodies high into the net, a scruffy goal just about sums up this match.

Cureton was looking for his 50th goal for the club, and a volley from Matthew Campbell-Mhlope’s right-wing cross looked to be a good chance, but it was blocked.

Constable was caught in a moment of indecision, as he rushed out of the box, Barnwell poked it past him, but George Quarrington-Carter was on hand to clear to spare his goalkeeper’s blushes.

Sam Robbins denied a shooting opportunity in the middle of the box, but it fell to Ward-Cochrane on the left, but it came at him too quickly to shoot at goal.

Bradley Sach fired into the side-netting from a tight angle, before a visibly shaken Constable was pressured by Barnwell to clear the ball, the big striker blocked it for a throw-in.

Burbidge made his first real save of either goalkeeper on the stroke of half-time, brilliantly tipping Keagan Cole’s long range effort over the bar.

The Blues came out from the break looking like a different team, and looked the far more likely to equalise than the hosts to extended their lead.

Manu had a long range effort saved by Constable, Barnwell had a shot blocked, before Josh Hutchinson skied an effort from a corner.

Manu suffered a serious-looking injury just as it looked like he would affect the game, he had to be stretchered off by physios and therapists from both sides.

Leyton Orient loanee Jordan Sweeney was dominant on the left side throughout the second half, but his crosses were blocked or over hit, before volleying over the bar from the corner of the box.

A great through ball to Hutchinson set up a great chance to seal the win late on, but he struck the post from close range when it looked easier to score.

Hutchinson had another chance in injury time, but curled into Burbidge’s arms and Cole fired over the bar from inside the box on the counter-attack.

Barnwell fired against the post in the last chance of the match, with the Potters Bar defence managing to scramble clear and prevent the late equaliser.