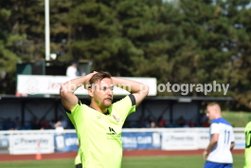 Corinthian-Casuals earned their first home point of the season in a 0-0 stalemate against Potters Bar Town.

Though Casuals were without their three first-choice Centre Backs and ever present Captain and Goalkeeper, Danny Bracken, they prevented Bar from finding the net for the first time this season.

Despite the shut-out, Manager James Bracken was disappointed that this was another opportunity for three points passed up by his side. It was a similar story, with plenty of forward endeavour and territorial possession, but final, clinical moves were sadly lacking.

Casuals fans might have been surprised to see the unusual back four which included Warren Morgan pairing with Coskun Ekim in the centre. Hero of the cup win over Chelmsford, Mazzar Ugradar also suffered an injury in the week, so in came ex-Oxford United, Solihull Moors and Hampton stopper Manny Agboola.

In truth, there’s not much to write about the game itself. The Scholars started bright whilst Casuals’ makeshift defence allowed themselves time to get used to their positions. Passing out from the back was cautious and methodical. The first real chance fell to Nat Pinney, who after an endeavouring run by Reyon Dillon, fired just past the far post.

At the other end, Agboola proved his worth, acrobatically saving from a well-drilled drive and latterly a looping header from Bradley Sach, clawing out the effort from under the crossbar.

Casuals looked to push on and found joy in wide positions. Dillon caused Andrew Lomas problems but when needed to find a calm head, lashed a drive high, high over the bar from a very scorable position. It summed up the afternoon perfectly.

James Bracken’s side never reached the performance levels of Chelmsford the week before and despite the point gained and a clean sheet with a makeshift defence, the gap opens up at the foot of the table as Casuals still seek their first league win of the 2019-20 season.

We’re disappointed with the draw,” said Bracken after the match. “We had one Centre Half fit coming into the game, but pulled out through illness in the morning. So, no fit players for those positions. We’re onto our third goalkeeper in three games, which is shades of last season.

“But I felt that took the pressure off us. If we’d conceded a few goals and lost, what did we expect? I had players doing jobs out of position. But fair play to them, they kept a clean sheet. Where we should’ve been at our weakest, we’ve kept the opposition out.

“We’re the first side that Potters Bar haven’t scored against. They’ve hit three against Lewes and East Thurrock, two against Enfield and Carshalton and defeated Hornchurch last week. They couldn’t score here. But that’s not enough.

“We’re disappointed because that was winnable. Again, it’s another opportunity that’s passed us by, like the Merstham and Brightlingsea games. We should’ve won it. If we had anywhere near the intensity of the Chelmsford game, we would’ve won.

"I’m disappointed with this result, more so than even some of the games we’ve lost. When you’re looking for those three points, that was a real opportunity. And we didn’t grasp it.

“Only one or two of the lads can come out of this match with any credit. They had the drive and desire to win a game of football. Everyone else looked like they were just getting through the minutes. You can’t have that attitude when you’ve not got a win on the board. They must apply themselves. That’s not the way to get the first win.

“I need to see character out there on the pitch. That wasn’t it. I felt it was lethargic, flat in the changing room and the first fifteen minutes. We fell short on our own. A few people came up to me afterwards saying we’d played okay, but that’s not enough for me.

"We wasted too many opportunities today. Had we just got the basics right and stuck balls in the right areas, it would’ve been a different outcome. Too many of our set pieces fell in the wrong areas and gave our forwards no chance.

"Until we’re out of the bottom three and looking up the table to where we can reach, we’ve got to do more. We can’t say ‘we didn’t lose’, when we’ve drawn against a side that are well beatable in a game that we had the majority of control.

"We’re better than that. I want them to do their best. Come Tuesday, I expect them to bounce back with their best. If they don’t, then we’ve got some big calls to make going into our biggest FA Cup game for 36 years. If they don’t up their game, I’m not going to Kings Langley with players that don’t have the heart or stomach to win. We want to advance in the Cup and they’ve got to go out there and show they can do it."