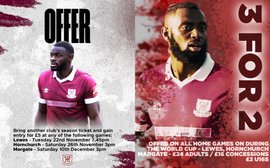 A chance to watch us for a discounted price during the World Cup!

We are delighted to announce that fans will have access to cheaper match day tickets during the World Cup, with two deals for fans available for home games during the tournament.

Firstly, fans will be able to watch our three home games with a three for two deal.

This means anyone attending will effectively be able to pay to watch one of our three home games whilst all Premier League fixtures are off for free.

The prices in the deal will be as follows:

To purchase a the three for two deal, which is online only, please CLICK HERE.

The second deal, an in person offer, involves fans who have Season Tickets from other clubs, home and away fans not included.

Fans can bring their Season Tickets from other clubs during the World Cup and gain entry to the Lantern Stadium for just £5!

The three matches that we will be playing during this period include:

We look forward to welcoming fans to the Lantern Stadium during the World Cup, and hope we can see an increase in attendance as we look to continue our challenge near the top of the Isthmian Premier League.