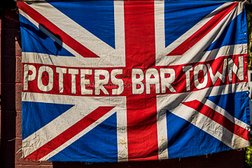 After the success of yesterday's win the boys were set up to try and win the second AFA trophy of the weekend.

The boys actually started very slowly (maybe showing signs of tiredness from yesterday) and our opposition (Alexandra Park) were really up to win the cup.

They pressurised all over the park and actually scored on 12 mins with a good header. 0-1.
This was the wake up call and the team started to play better. We scored the equaliser on 22 mins with a great finish on the run from Jonah Sarpong. 1-1.

On 27mins we scored again when following a scramble in the penalty area Jonah smashed in his second. 2-1.

We were starting to control the game and playing some good football and Rhys Mungrah made it 3-1 on 32 mins.

A good half of competitive football came to an end. 3-1.

Second half, and again we were sloppy in possession and not at our best. Alexandra Park were trying everything to try and get back into the game and it really was end to end.

Then on 76 mins following a corner they had shot that Danial Mahammadi did well to save but the rebound fell to there striker and he made no mistake from 4 yards. 3-2 game on.

We raised our performance again and created a couple of good chances but the final ball let us down.

Then on 88 mins a really good break was finished off by Alekos Lambrou in the middle to make the score 4-2.

AP carried on pushing for a goal and then just as the referee was about to blow for the end of added on time, we committed a poor challenge and the referee awarded a penalty. With the last kick of the game the penalty was scored. 4-3.

An entertaining game was over and we had secured the second win of the weekend.

So champions again and two trophies in the cabinet.

Well played everyone involved and special mention to Martyn and Ricardo for their management of the squad this weekend.

So back to the league to see if we can achieve the treble.