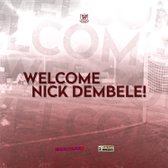 The star striker arrives at Bar!

We are delighted to announce the signing of Nick Dembele from Bognor Regis!

Dembele joins Sammy's Scholars from The Rocks, having scored 18 goals in 24 matches last term playing for Braintree and Gosport Borough.

The striker who can also play on the wing has experience at step three with his former club, where he scored four times.

A pacy striker with a deadly finish from range, Dembele is a talent who will be sure to play an important role in our season.

We would like to welcome Dembele to the club and look forward to seeing him lead the line at the Lantern Stadium.