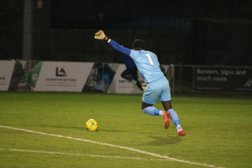 A wet and windy Bonfire night at the Pakex Stadium saw Potters Bar take on Cheshunt in the Herts FA Charity Cup.

The Scholars went into the game looking to bounce back from their 3-1 defeat against AFC Hornchurch in the Isthmian Premier Division on Saturday and had the perfect opportunity to prove their worth to boss Lee O’Leary in a quarter final against local rivals Cheshunt.

The Scholars thought they had got off to the perfect start when an acute pass from Joakim Ehui played Brad Sach in on goal 7 minutes in. He coolly lobbed the ball over the Cheshunt ‘keeper but the linesman’s flag was raised to disallow the goal.

After an even opening to the tie, the scholars hit the bar following a beautiful cross from Bobby Mills to set up Brad Sach, who hit the woodwork. The strike was followed up by Chris Doyle, who volleyed into the Ambers Keeper Harry Girling’s midriff.

Amadou Kassarate was then booked for a cynical challenge on George Nicholas, as the boot of the Cheshunt player seemed high on Nicholas’ leg.

The first half ended as an even contest, in which the Scholars had chances to take the lead which they failed to take. Both managers had fifteen minutes to show the teams the tactics for the second half, knowing that if the second half remained goalless, the game would go straight to penalties.

Constable rushed off his line early in the second half to deny the Ambers the lead, but just a few minutes later in the 54th minute Cheshunt got their reward for their early dominance in the second half as Diallo’s effort on goal took a big deflection to take it past Constable to give them the lead.

Cheshunt then doubled their lead shortly after as Sam Collins directed his corner directly past Constable, giving Bar a difficult task to turn the tie around in the half an hour that remained. O’Leary responded to the difficult start to the half for the Scholars by making a double change, that saw October’s player of the month Ben Ward-Cochrane come on. He replaced Constantinou, as Ehui was replaced by Young.

Bobby Mills then added to Bar’s misery: he lobbed ‘keeper Constable, with the goal going in off the post 65 minutes in following a defence splitting pass that played Mills in on goal.

O’Leary’s men began to grow into the second half as Brad Sach fired goal wards, but Girling was equal to it as he tipped it onto the Cheshunt crossbar.

Cheshunt rubbed salt into the wounds 78 minutes in to deny Bar any chance of a comeback when Bobby Mills’ audacious chip found its way past Constable and into the bottom right hand corner.

The game ended 4-0 to the visitors, as an even game in the first half seemed to slip away from Bar who are now out of the FA Charity Cup and will turn their focus to playing Cinderford in the FA Trophy this weekend.