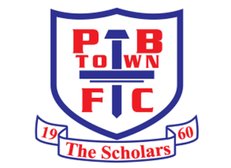 An untidy game that ended in some unnecessary unpleasantness sees the Scholars into the hat for the 4th Qualifying Round.
The worst of starts saw Ware take the lead on just eight minutes , Olu Akinsanya rising at the back post to convert a free-kick.

Bar were soon back in it though as James Budden rose above the defence to head the ball home from a George Craddock corner.
Much of the rest of the game proved to be a typical battle of a cup tie with plenty of action but neither side creating too much in the way of clear cut openings .
Brad Sach had the ball in the net on 28 minutes for the Scholars but was ruled offside,and a great run into thebox by Chris Doyle saw the ball fly across goal just begging for a touch but no Bar player could reach it.
The second half proved much the same with the best chance for Ware falling to Liam Hope who's long range effort was well saved by R'avan Constable.
With two minutes to go a George Craddock effort looked goal bound but the shot was brilliantly saved by Ware 'keeper Calum Kitscha.
But that was not the end of the action as Keagan Cole found Ben Ward-Cochrane with a fine long ball.., Ward-Cochrane burst of pace took him past the defender who first clipped him and then pushed him to give The Scholars the penalty. Josh Hutchinson calmly stayed out of the usual shenanigans that surround the award of a penalty and coolly slotted the ball home to put Potter Bar through.
Ware players were clearly disappointed and in the ensuing nonsense both Brad Sach and former Scholar Jordon Watson were shown red cards by the referee.