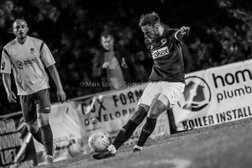 A point a piece as Bar remain unbeaten

Bar maintained their unbeaten start to Premiership life as ten man Whitehawk hung on for a share of the points.

A largely uneventful first half came to life late in the half as the Scholars took the lead. A 34th minute Keegan Cole free kick was helped on by James Budden for Steve Brown to volley the home side into the lead.

The joy was short lived, however, as just five minutes later a Muggeridge free kick lead to a blocked effort by Rodrigues with centre back Haary Shooman slamming home the loose ball .

The second half was once again fairly incident free until the latter stages. With 26 minutes remaining Rodrigues saw red fro the Hawks having picked up a second yellow card for a mistimed tackle.

Against ten men the Scholars upped pressure but despite the man advantage rarely troubled Melvin Minter in the Hawks goal.

Bar almost snatched all three points deep into stoppage time as a fine long range effort from Scholars Man of the Match Billy Adcock produced a acrobatic flying save from the visitors 'keeper.