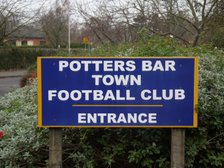 'Scholars' start with a bang to down Carshalton

Neil Metcalfe at the Pakex Stadium

Potters Bar Town got the new Isthmian League Premier Division season off to a flying start with a 2-0 success at home to Carshalton Athletic.

After their first season at this level ended with a nervous battle to beat the drop, there was a feeling of rebirth and new beginnings.

The Pakex Stadium, replete with its two new stands, also featured new goal nets and dugouts, while the pitch itself was showing the results of long hours of love and attention during the summer.

And that positive feeling will only be boosted by the victory.

They did have some help mind you, as The Robins had seen goalkeeper Billy Bishop helped back down the tunnel to the dressing room before the half-hour mark, following a coming together with Josh Hutchinson.

With no replacement keeper on the bench it led to centre-half Daniel Pappoe going in goal for the remainder of the game.

He had no chance with either goal though.

A break from Bar found Hutchinson down the right-hand side of the pitch, a position he caused havoc in for most of the day.

He showed wonderful strength and even better awareness to flick it inside where Bradley Sach was totally unmarked and he slotted it with ease past the replacement stopper.

The second featured the front two again, as well as Ryan Young. It was a lovely move with Young sliding it into Sach who simply cushioned it back to his strike partner and Hutchinson slid it into the corner.

But while people will look at the result and point fingers at the misfortune in goal that befell Carshalton, this was a superb performance from the home side.

It was built on their usual solid defensive style but was also full of attacking intent and the desire to work hard and play good football.

And while it is still ludicrously early in the season, it was certainly not the showing of a team destined for another year at the bottom of the table.

Before the game it was the strong wind that appeared to be the one thing that was going to have the major impact on the game, blowing as it was almost straight down the Watkins Rise pitch from the Town End.

But as is so often the case it was the side playing into it that created the better chances.

There wasn't a lot of them to be fair in the opening 45 minutes but the best of them came in stoppage time and should have seen the hosts go in ahead.

Hutchinson did superbly well to get the better of Danny Dudley down the Bar right and his low whipped cross across the six-yard box was begging to be turned in.

It should have been too but the stretching Sach could only get the merest of touches and deflected it wide.

Almost immediately after that Carshalton were appealing for a penalty after a challenge from George Quarrington-Cooper that earned the Bar centre-half a yellow card.

The referee felt it was just outside the box though and the Scholars, as they had for the whole of the first half, dealt with it in relative comfort.
The home side themselves had appeals for a penalty in the incident that led to Bishop going off.

A miscommunication between goalkeeper and defender, the second such occasion in a matter of minutes, saw Hutchinson nip in and get a toe to it.

The resulting collision saw the striker go down and the keeper injured but no movement from the referee.

Bishop did reappear in the second half saying he had lost the feeling in his arm briefly and had a potential concussion.

His arrival in the stand came just after the Scholars had taken the lead.

And if that goal was just how manager Lee O'Leary would have wanted his side to start the second half, the second goal 20 minutes in was courtesy of the type of move he would have prayed for.

It destroyed any confidence Athletic had and only served to increase the mood in the home camp.

There should have been a third when Young was passed the ball in the centre of the box.

His first touch took him clear of the defender but with the goal gaping, he miscued completely and the ball ran harmlessly through to the prone Pappoe, who looked like he had already accepted picking it out of the net again.

Carshalton did have a couple of chances late on as Potters Bar rang the changes but it never felt like there would be a grandstand finish.
Nobody inside the ground wearing maroon cared though and they will look forward to the new season with renewed confidence.