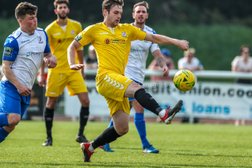 But the scoreline belied the actual play.

The Scholars had much of the early action and Brad Sach almost took advantage of good work by Josh Hutchinson but was foiled by Roberts in the visitors goal.

Approaching the half hour Sach was again foiled as the keeper pushed his shot on to the bar.

Two minutes later a Keagan Cole shot beat the keeper but his effort came back off the foot of the post.

The visitors then took the lead on 36 minutes, Scott Heard finishing a good move with a back post header.

Keagan Cole was denied an obvious penalty but received a yellow card for his efforts.

One nil down at half time could so easily have been 3-1 up.

Bar did get back in it ten minutes into the second half as Josh Hutchinson took advantage of a defensive error to level the scores with his fourth of the season.

Scott Heard restored the lead for the visitors within seven minutes, again converting at the back post from a cross.

Bar pushed forward looking for an equaliser but were frequently hit on the counter attack. Ira Jackson took advantage of Bar being down to 10 men due to an injury to add two late goals to give Invicta a flattering result.