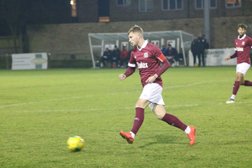 A tale of two penalties

A feisty encounter saw The Scholars come away from White Hart Lane with nothing to show from a game they looked comfortably in control of for the first hour.

The Scholars looked to have extended their lead just on forty minutes as Ward - Cochrane again outpaced the home defence to strike a fine finish past the home 'keeper. But somehow the goal was chalked off for offside which saw the start of an extraordinary five minutes that saw two Boro players booked and the manager sent to the stands - AFTER the decision had gone their way!

Potters Bar still had time in the first half to create a final chance which Brad Sach hit over the top following good work again from Hutchinson and Ward-Cochrane.

Twelve minutes into the second half The Scholars were disrupted by an injury to Will Wambeek and found themselves behind within the space of eight minutes.

With Bar looking in control and pushing to increase their lead Haringey were gifted a penalty as Roman Michael - Percil went down under a challenge on the edge of the box. The recent Scholar got up to convert the spot kick and pull the home side level.

Two minutes later Michael-Percil broke away again forcing a good save from R'avan Constable but the rebound was followed up by Romoluwa Akinola to put Bore ahead.

In an effort to regain control Bar replaced George Nicholas with Imedd Kartita and Hutchinson with Ryan Young. And it worked just six minutes later as Young picked up the ball on the right wing and lashed a 25 yard effort over the Haringey 'keeper to put the Scholars level once again.

The relief was short lived. A Haringey corner from the right found Rakim Richards in the box and his unchallenged header flew into the net to restore the home sides lead.

The drama was not over though. A long clearance from Constable found Brad Sach on the edge of the Haringey area. He wriggled his way into the box and was brought down by a Boro defender. Unfortunately it was not to be for The Scholars as 'keeper Jonathan Miles produced a fine double save to deny the them a share of the points.