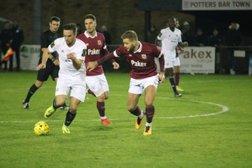 Bar fell short against the ten men of Bognor Regis in a frustrating affair that saw Bar waste chances and then fail to keep a clean sheet, which meant they ended up empty handed in a game they could easily have won.

An edgy start to the game saw both sides trying to split their opposite number’s defence, but neither were able to do so in the opening minutes.

The opening 15 minutes of the game were largely uneventful, as both sides looked to be trying to examine their opposite numbers, as the game was yet to see a meaningful attack.

With 17 minutes played the Scholars fashioned the first opening of the tie, as Young cut inside and fired across goal, but Tangara was equal to it, as he tipped it past the post.

There was a moment of panic for Constable, as he lost possession to Smith, but his touch took him out of play, much to the relief of Bar’s ‘keeper.

Sach got himself back to make a vital block to stop the Rocks’ counterattack, that was at one stage a 4 on 4. The last few minutes had seen an increase in action on both goals, with 25 minutes on the clock.

The 32nd minute mark saw Sach spin his marker and force a wonderful save from Tangara, who got down to the driven shot and tipped it round the post.

The Rocks tried to take a lead against the run of play, as Tuck finessed a shot just over Constable’s bar with a shot that went from left to right.
Solid Scholars defending gave Bar an opening, but Sach chose to pass right, avoiding the in-form Ward-Cochrane to the left. A cross attempted to find him, but Ward-Cochrane was unable to meet it at the back post.

Half time ended a fascinating opening 45, as both sides looked to try and examine their opposite number. There had been no goals, but there was entertainment aplenty from the opening stages.

Despite a fantastic first half, Bar found themselves behind as Lethbridge found himself in acres of space on the left-hand side, who fired past Constable with 49 minutes played.

Bar had a wonderful chance to level, which they passed up on as a driven cross found Hutchinson, who looped his effort over the crossbar.

Ward-Cochrane had an equally fantastic chance to score as he rounded the ‘keeper but couldn’t get his effort on target. Bar somehow found themselves behind in the tie despite having the vast majority of the chances. In the first fifteen minutes of the second half alone Bar had created two glorious chances.

White saw red for his high and wild challenge on Young, which left the Scholars eleven on ten, however he appeared to have injured Young in the challenge. He had to be replaced by Gogo.

Bar threw men forwards to try and get an equaliser, but Bognor were holding firm. Ward-Cochrane found himself in again from a goal kick, but his shot went high and wide. Bar had fashioned several openings, but unbelievably couldn’t convert.

Bar were struggling to deal with the Bognor counterattacks, as Bar appeared to be losing grip on the game even though they had the advantage numerically.

The Scholars were unable to make any use of their chances or the fact that they were playing 10 men for about half an hour in the game. After full time, Scholars manager O’Leary admitted that “[Potters Bar] deserved to be on the losing side” in an interview for the club’s Twitter account.