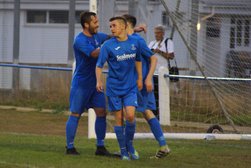 Newcomers help PUFC to first points of the season

Manager, Laurence Revell, had been busy during the week making a number of new signings. This was because four players are injured, four had left the club and two Under 18’s had represented their County in a cup match on Friday evening. Four newcomers (Ashton Fagan, Ololade Esuruoso, Josh Francis and Folabi Agunbiade) started the match and one (Folabi Agunbiade) came on as substitute in the second half. Added to this, Ross Randall stepped up from the Reserves and was made captain for the day.

Not an ideal preparation for a Potton side that had lost their first four (all away league matches0 but to their credit they battled well throughout the game and came away with three points---their first of the season.

Potton started slowly and after a ball was given away a centre was met by Mo Kota and Sam Irish did well to push the shot over the bar. Ellis then saved a header from Magagada low down. Potton were coming more into the game and a good run by Oladejo saw his fierce centre elude everyone. Harpenden’s tall defence was easily dealing with high balls from Potton but in the 16th minute they misjudged one and their header fell into the path of Agunbiade who took it to the edge of the penalty box and scored with a low shot to give Potton the lead. Agunbiade then played Nathan Mullings in and his shot was deflected for a corner. In the 27th minute things got better for Potton when Agunbiade played the ball to Mullings who beat his man and his low centre was turned into the net by Kieran Hamilton from close range. Canham saw his shot well saved by Irish and Potton were now defending well. Sam Willis played a good ball to Mullings who took the ball on and saw his shot saved by the keeper coming out. Just before half-time Dance saw his shot go well wide. HT 0-2

In the second half Harpenden really dominated play having plenty of possession but some good defending by Potton kept the number of clear cut chances to a minimum. Magagada shot wide then a free kick from Linsell was saved by Irish before McGreevy headed over from a corner. At the other end Potton broke away and Hamilton’s weak shot was easily saved,. Potton were conceding some free kicks, some awarded after strange decisions by the referee, and Harpenden came close to scoring on a couple of occasions. In a rare Potton counter attack Osei-Tutu shot well wide. In the 85th minute Harpenden scored with a close range header from McGreevy from a corner giving Irish no chance. Potton were living dangerously but battled well to keep Harpenden at bay. The referee added four minutes of added time and Potton did well to hold out for a welcome 3 points victory.

Next Saturday the First Team play their first home league match of the season when they entertain Dunstable Town.