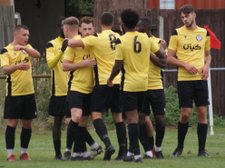 It was always going to be one of those day when the planned journey, according to Sat Nav, should have been an hour and a quarter and leaving at 12.00 midday, but due to a serious accident on the M1 it actually took three and a half hours. Some of the players had arrived before 3.00pm but others arrived after and the kit with the Secretary did not arrive until 3.330pm. As a result kick off was delayed by 45 minutes—this was not the best way to prepare for a match.

Rugby started more strongly with Irish making two good saves before Thomas intercepted a good Rugby passing move to stop any shot on goal. In a rare Potton attack Dowridge fired well over the bar. In the 26th minute Rugby took the lead when a shot from outside the area by Lamar Parkes, appeared to be going well wide, when it took a wicked deflection to go into the net. Play was now more even with Rugby having the ball in the net to be ruled offside and Willis saw his shot blocked for a corner. In the 41st minute Rugby increased their lead when from a long throw in Liam Francis headed in unchallenged. Just before half time Pyman saw his effort narrowly go over the bar. HT 2-0

From an early free kick from Wilson the Rugby keeper dropped the ball but no one was on hand to put it in the net. From a Potton corner Rugby broke quickly and had three forwards against one defender but they failed to make the most of the chance. Dowridge made a good run but shot wide. Soon afterwards the Potton defence gifted Francis a shot at an open goal to increase their lead. Potton battled to the end with Amadi seeing his shot blocked and Pyman’s effort was deflected for a corner. A couple of efforts from Rugby went over the bar just before the end. FT 3-0

Although on the day everything appeared to go against Potton it has to be said Rugby were the better team and deserved to win.

One consolation it only took one and a quarter hours for the return journey!!!

On Saturday 25 September the First Team are at home to Baldock Town in the Second Qualifying Round of the Buildbase FA Vase KO 3.00pm.

Then on Tuesday 28 September the First Team are at home to Newport Pagnell Town in the uhlSports United Counties League Premier Division South KO 7.45pm.