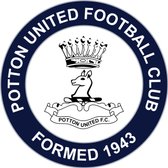 Classy first half in Oadby Win

Potton started well and Camara made a run inside the penalty area and was brought down by the keeper with the referee immediately pointed to the spot. Willis made no mistake to give Potton the lead in the 5th minute. Soon afterwards Dowridge made his way into the penalty box but Potton’s appeal for another penalty were turned down. Potton were playing some good football and Pyman received a pass and with only the keeper to beat he passed to another forward who was offside. In the 22nd minute Dowridge dribbled his way to the by line and from his pass Maxwell put the ball into the net. Soon afterwards a shot from Dowridge went just wide of the post. In the 27th minute Potton scored their third goal when Pyman headed home from close range following a Dowridge corner. Oadby were rarely troubling Irish in the home goal but an effort from Gomes was heading for the top corner and Irish did well to tip the ball over the bar. Potton completed the scoring in the 41st minute when a centre from Dowridge was headed home low near the far post by Maxwell. He injured himself in doing this but recovered after treatment. HT 4-0

Potton started the second half well with an effort by Andrews going over the bar. Then Oadby counter attacked with first Irish saving from Williams and then pushing a shot from Williams over the bar. Amadi was put through and his effort was cleared off the line before a free kick from Willis was well saved by the Oadby keeper. In another Oadby attack new signing for Potton Oliver Swan cleared an effort from Bhram off the line. In the final stages Pymans shot hit the side netting. FT 4-0