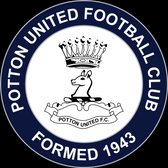 10 Man Royals hold on for point

For the second match between these two teams Eynesbury’s Jordan Brown was involved in an incident that resulted in a Potton player being sent off. This time it was goalkeeper Sam Irish. Eynesbury had just scored their goal in the 54th minute when he prevented an Eynesbury player retrieving the ball to restart the match. This led to a mass melee involving in the Potton net and somehow, the referee, who didn’t have a very good match at all, decided to show Irish a red card. This resulted in 16 year old Curtis Bloxham making his debut for the team and he produced three or four outstanding saves to keep Potton in the game.

Potton started rather nervously giving the ball away on many occasions. Uttridge saw his shot saved by Irish. Sam Willis was elbowed in the face and required treatment for some time. Jamie Sylvester had a run but shot high and wide. Lobjoit produced a fine save from Irish who could only push the ball out to Jordan Brown who missed an open goal. Potton took the lead in the 29th minute when a through ball from Thomas found Camara and his low centre was turned into the net by McArdle. Pyman’s shot was saved by the keepers feet before McArdle shot wide. Just before half-time Camara was heavily tackled from behind and after lengthy treatment had to leave the field—he was replaced by Ieaun Lewis. Tow minutes into added time Dowridge received the ball just outside the area and his shot flew into the net. HT 0-2

Eynesbury came out more aggressive in the second half and committed several fouls. In the 54th minute Potton failed to clear the ball and Robert Ducket’s shot went into the net. Then the melee with substitute goal keeper Bloxham replacing substitute Lewis. Eynesbury had an effort cleared off the line and twice Bloxham made point blank saves before saving dull length at the expense of a corner. In the 2nd minute of added time Lobjoit scored with a header. The referee still played another 8 minutes of added time before blowing the whistle. FT 2-2

A back to the wall performance in the second half saw Potton gain a deserved point.