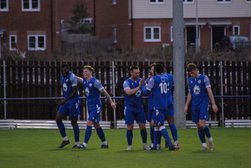 Royals back to winning ways

Potton were without Luke Pyman (suspended for 1 match after receiving 5 bookings) and Liam Andrews (injured). Potton produced their best all round display for some time and came away worthy and convincing 4-0 winners against Rothwell Corinthians—and if they had taken all of their chances it could have been greater.

Potton started by passing the ball around but they allowed a Rothwell player to cross the ball and Sam Irish did well to push the ball out of the way of another forward. When Sam Dowridge was fouled Jack Thomas saw his shot blocked by the wall. Louis Octave was booked for a tackle before Brooks shot over the Potton cross bar from some distance. In the 26th minute Thomas worked his way through and his cross was converted by Dowridge to give Potton the lead. Minutes later Rothwell’s Ledgeway was show a straight red card for a high and dangerous tackle. Bird headed over Potton’s goal from a corner before Sam Willis had two efforts that were both wide of the target. In the 41st minute a through ball was played to Isaac Charles who calmly left footed it past the keeper to increase Potton’s lead. Just before half-time Thomas was wide with a header. HT 2-0

Early in the second half a good move by Potton ended with Callum Wilson hitting the underside of the crossbar. Then Potton’s defence gave the ball away on a couple of occasions and were grateful for Sam Irish making two good saves. Potton were now making the extra man work to their advantage and first Jamie Eames shot wide and then Thomas made a tremendous run beating 4 players before Potton had a couple of goal bound shots blocked. Dowridge made a good chance for himself but shot over and at the other end Bush was just wide with his effort. In the 60th minute Potton increased their lead when a shot from Thomas was deflected into the net. Brooks was put through and again Irish produced a save to deny him. Dowridge was put through and he saw his effort rebound from the post. In the 67th minute Thomas played the ball to Aaron MCArdle who rounded the keeper and scored. In the closing minutes it was all Potton with Thomas shooting wide, McArdle heading wide and Amadi shooting wide. FT 4-0