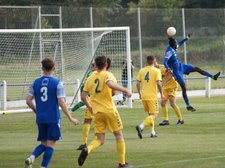 Potton bowed out of this years Emirates FA cup losing to an 89th minute goal. There was not much to choose between the two teams with Sudbury being one level above Potton. Neither team created many clear cut chances but the crowd of 211 created a good atmosphere for this closely fought match.

Early play was scrappy but a shot from Wilson went wide of the post and then he saw his free kick go narrowly wide of the post. Temple shot high over the bar and Potton were guilty of some por passing. From a corner to Potton Sudbury made a quick break and were two against one Potton defender but Temple put his shot wide with only Irish to beat. Sudbury had a period of pressure when Skubich shot high and wide and then saw his shot blocked by Thomas at the expense of a corner. From the corner Grimwood headed over. A poor clearance in the box allowed Gilchrist to shoot wide. Play continued to be in the middle of the pitch with Potton unable to create clear cut scoring chances. Just before half-time Temple’s free kick went over the bar and Gilchrist’s weak shot was easily collected by Irish. HT 0-0

Early play in the second half saw Sylvester receive a yellow card for a late challenge before he saw his shot go wide. Potton were having a job to break down the Sudbury defence and play their normal passing game. Also they were committing too many fouls which broke up play and gave possession to Sudbury. Temple saw his shot go wide again before one move that did get behind the Sudbury defence saw the ball bounce unkindly and go off McArdles leg and go to the keeper. Sudbury did have an effort that hit the cross bar. With everyone looking at a replay Sudbury hit the bar again in the 89th minute and their substitute Osbourne was most alert and netted to give Sudbury a place in the next round. FT 0-1

Potton were by no means disgraced in this performance against a higher level team. Sudbury did a good job in containing them and Potton did not perform to the level they have achieved in some of the earlier matches this season.

On Saturday 11 September Potton visit Halstead Town in the First Qualifying Round of the FA Vase. Halstead play in the Thurlow Nunn First Division South.