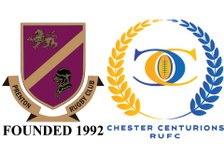 Chester Centurions play their 1st home fixture at The Dell on Saturday (12/10/19). A little information about our new partners at article.

Some information about the clubs & IGR
Chester Centurions are Chester's first and forever growing inclusive sports team in Chester, they are part of International Gay Rugby England (IGR). Who following a fantastic Chester Pride 2017 as part of the Summer Pride Tour of England, supported by England Rugby and Spirit of Rugby 2012 uncovered plenty of interest within the LGBTQ+ community to establish a brand new, Inclusive Rugby Union club then the Chester Centurions were formed.

This inclusive rugby union club is a place where adults in and around Chester can give rugby a try regardless of gender, sexuality or rugby ability in a friendly environment with zero tolerance towards homophobia or bigotry. IGR have established over 80+ clubs around the world and this month have just celebrated their 20th anniversary for inclusive sports.

Newcastle Ravens RFC were Established in May 2006 in the North East of England, taking players from Newcastle-upon-Tyne, Sunderland, Durham, Darlington and the surrounding areas. They have been the leagues Champions for 2018/2019"