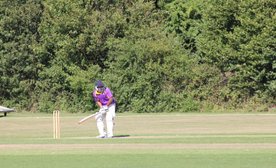 A battle of shaved heads! - Match Report by Ritesh Verma

There are certain grounds that get etched in your memory, for they are picturesque, for there was a hot air balloon that flew over, and finally for there was a good batsman took the game away from you.

With laughter in the air and blessings from weather gods, the game ensued with the home team deciding to bat first. Yes, we were all secretly hoping to bat first, since it would have given us much needed break but on a nice sunny day like that you are still pumped up anyway. For Parm, it did not matter, since there was ample rest! Jokes apart, you have to hand it to the guy. Despite his hamstring troubling him acutely, he stood there fulfilling his fielding responsibilities. Another legend is Hitesh, who besides fulfilling his duties of the social secretary and the designated driver, came in and bowled another amazing spell. Right on the money as they say. I was bowling from the other end and we both were keeping the the opposition under pressure. It was a bit frustrating for both of us as the wickets were just not coming. The luck surely was not on our side. A few great deliveries missed everything, a few LBW appeals were turned down but then we were keeping the run rate under control. We kept bowling good and Rajiv kept doing his one hand bhangra, grabbing those rippers.

The first change was brought in and boom, a magical delivery from Sabs shattered the stumps of one of the opener. David, from the other end, was also varying the length and the pace beautifully. The pressure started building again from both sides. All this was complemented very well by apt fielding changes from our very own Vij. He and the bowlers were planning it so well. We knew we were in. And then the third batsman missed a ripper from David - the banter king (BK - he loves KFC more though!). From the other end, Sabby, our very own waqar, just kept aiming for the toes. This one was right on the money. Foot first and then bat and PPCC tour XI went up in the air with the appeal. The finger went up and the celebrations ensued.

However, at the other end, One of the openers was cautiously building his innings - blocking the good ones and taking those quick singles. Vij decided it's time for some Hambo music to play. And the experience paid it's dues. The second opener hit one towards Sandeep, who made no mistake and ensured that another batsman returned to the open-air pavilion.

So, we were in, pressing hard with the expectations of a quick wrap-up. So we thought. Bruised, tired and we were then outclassed. Their skipper aka their best batsman aka their version of Sandeep in so many ways - shaved head, beard and a very similar stroke-play, was middling literally everything. David and Sabby bowled their heart out but the runs were flowing now. So Skip rightly so opted for a few changes. But by that time both the batsmen had settled in and pushed back hard. That sneaky run-rate started to climb up on us.

This continued for sometime and then one retired hurt decision slowed things down for us. We would have wanted to get their batsman out but I guess at that point even that was fine. The other set batsman decided to take the charge now. He was playing a supporting role till now but he switched gears now, but in vain. Banter King was back! A thick edge and the ball went miles in the air, only to find the safe hands of PPCC chairman. It was on again!

Vij acted promptly. I was back in the attack. Two quick wickets followed. We pulled back. But they reacted well. Slowed things down a bit. Started building again. The pain of 5th bowler was aching the skip. The over management became tricky. So a partnership ensued again only for Sabby to end it. The opposition finished on 249 for 8 in 40 overs.

We started strong. They waited for their big guns to come out. Not us. We sent them right at the top. Hambo and Sandeep were middling everything keeping up with the asking rate till the 13th over. A 100 run partnership was on the cards when Sandeep got injured. But then our bad luck hit the fan, brought the ceiling down and washed away the smiles from our faces. A glorious cut through point and he was down on the ground. We all wondered why? But he was in pain. He tried to keep going but it was visible that he wouldn't last long like that so he made the right call - to retire. Vij and Hambo started to re-built again It was going all well but for one lucky throw that ended Hambo's innings. A well deserved 29 with 4 glorious boundaries.

So went in our middle order but their skip sensed the opportunity and brought into attack his slow battery. Yes, the idea was to take the pace of the ball. Completely. PPCC batsmen love middling those swinging, fast swirls. We all know that. And this wasn't going to be easy. Just like his batting line-up, he followed a plan. A plan to conserve his even better bowlers. Rajiv got caught trying to push the run rate again. Vij and Sid started rebuilding the innings. Some glorious shots but the demon of the asking rate rose its evil head again and wickets followed.

Banter King a.k.a David a.k.a Dave a.k.a Sid (yes, I know) played some magnanimous shots. He had done something similar the previous day as well in the T15 game. And so he continued. Effortlessly and gloriously. H, who we all know, can be mighty dangerous on his day missed a slow one from the grunt. Yes, that annoying grunt. This slow bowler, a clear Maria Sharapova fan, made the most annoying sound you can hear just before a delivery departs in your direction. He got David as well. Sandeep returned and hit a few of those magical shots again. I remember umpiring and witnessing those worry lines emerging back on their skipper and bowler's forehead. But it didn't last long. He was clearly in pain and had to return to the pavilion again.

Sabs decided to play his natural game as it was required. I was only supporting him in his stride to lead us back in to this chase. Some glorious, clean hits ensued but with asking rate climbing up to 10 an over and some tight bowling ensured we get all out, not very far from our target though.

It was a good chase with some great moments, like when Parm and Andy were on strike and both had runners. A total of 4 batsmen on the field. Oh!, how confused the humanity was at that point.

Man of the Match: Sandeep 1.0 for his glorious 50 and gallant effort, under duress, to bring us close to the target