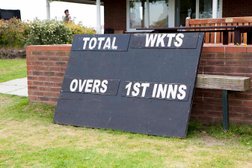 The end of the road

After another uneventful night of silent reflection drinking Wagh Bakri tea and Haldi (Turmeric) milk to help mend the fatigued bodies after the exertions from the previous two games, all in the company of a female plumber dressed in club colours, the morning of Sunday 16th August started off with a well-deserved lie in. Once checked out, the touring party gathered in front of the regional HQ, four doors down from the hotel, of a political party that strangely enough had the same unique colours as PPCC, for a team photo. Needless to say, PPCC had a better idea and understanding of their tour manifesto and club policies. There was no party division here.

With the stench of fish firmly removed from their memories, the touring party had a yearning for a trip to Havana, Cuba, which was directly due southwest from the Weston Super Mare Pier. Alas, Hitesh forgot to ask for the optional flying kit from the van rental company and with the state of Sid who was the designated driver for the day, sticking to the road was the better option compared to soaring through the blue skies, though some may argue that point.
After the team photo, headed towards Bristol to pick up Junior en-route to the final match of the tour against Abbots Leigh. Junior joined the party for the day, and he was a welcome sight amongst the walking ER room that was PPCC. The list included a strained side for the skipper, which has now ruled him out for the rest of the season, back strains, hamstrings, ankles, elbows, shoulders, severe hangovers, and then there was Parm who was an example to all youngsters out there and showing them the disadvantages of warming up. Parm was to field in the newly formed long shade position in order to protect the ailing bodies of the rest of the team.

Abbots Leigh’s ground, just like the rest of the grounds visited on tour was very picturesque, although the steep slope running towards the boundary did make the stomachs a bit queasy knowing that there was probably going to be a long chase or two when in the field On arrival the two captains got together, and very generously and sportingly, Abbots Leigh agreed to let PPCC bat first and also reducing the overs down to 30 per side. Junior replaced the ever ageing Andy, who must have thought the gods were smiling on him, as beyond the tree lined curtains for a fence, underneath a blanket of soft fluffy clouds that looked like they were mini waves crashing in to the blue sea which just so happened to be the sky, was a softball tournament that caught the attention of his very quizzical mind. If only he possessed a smart phone or tablet, he needn’t have bothered to venture far from his seat in the pavilion to satisfy his curiosity as he could have asked Siri or just Googled what softball was. However, Andy does not own a smart phone or a tablet or have direct access to the Internet, and if you are wondering why in this day in age of high tech digitalisation Andy has not succumbed, then feel free to ask him, but do make sure you are under the influence of some kind of drug, be it legal or otherwise. (PPCC does not condone the use or promotion of illegal substances).

Sid and Harish opened the batting for PPCC, both with blood shot eyes, and injuries of various kinds. The ever-reliable Harish taking first strike, and as usual dispatching loose deliveries to the boundary. Sid on the other hand was as shaky as ever. A length ball was hammered straight down the ground, landing just inside the ropes. That shot should have given him the confidence to continue playing positively against the very friendly bowling on offer. Unfortunately, with the next ball being bowled at the same combined pace of which Parm and Andy could move when fully fit let alone being injured, and with a combination of too much time and too many shots going through his head, the ball went through the big hole in his bat and bowled him.
In came Vijay, looking fresh as a daisy, and provided great support to Harish, who continued to hammer away the bad balls and pick up the 1’s and 2’s when on offer. After a shot too many, Harish was out caught for a well-played 32. The rest of the line up all contributed to the scoreboard without a single duck being registered. Boundaries were hard to come by, but by placing the ball in to the vast open spaces on offer and with the state of the team the running between the wickets was a great surprise, but very welcome indeed. After the end of the 30 overs, PPCC ended on 158 for 9.

After a well-deserved break for tea, the second innings of the game convened. Junior opened the bowling in usual disciplined style. In partnership with joke a minute Dave, they kept the Abbots Leigh openers quiet with only the odd loose delivery. The breakthrough came when Junior held on to a firmly hit straight drive from Tucker, and caught it sensationally one handed. It was a shame for Tucker, as he looked likely to make big inroads in to the target, but to pick out the only sober man on the field who still had fully functioning limbs and muscles, he must have thought why he hadn’t joined PPCC’s party on Saturday night for some luck.
Replacing Junior and Dave were Ritesh and Sabs. Sabs, who spent the afternoon whistling Himesh Reshamia’s song Aashiq Banaya and Tu cheez badi hai mast mast from the film mohra, bowled well, though slightly expensive still managed to take a wicket to help restrict the run chase. Ritesh on from the other was the star man of the day. Ritesh bowled well the whole tour for not much luck. Today however his good form finally paid off nabbing 4 wickets with fast and hostile bowling helping make significant inroads in to the Abbots Leigh line up.
However the old adage goes, catches win matches. And on queue Harish did not disappoint. With the game closely poised, a high swirler, which looked as if it was going to fall short, yet Harish sprinted in like a gazelle and caught it with the ball more feet than inches of the ground, yet it was still a marvellous effort. Though the catch may have been spectacular, the celebration dance which followed was equally if not more impressive. The way those hips gyrated, and those tree trunk like legs effortlessly glided over the turf were very similar to those of an exotic dancer in a seedy club in a back water town like Weston Supermare.
Hitesh, the 5th bowler came on and due to his own side strain injury paid homage to MP3, and bowled some left arm spin. Hitesh picked up the last wicket to fall catching Bull of his own bowling to wrap up he Abbots Leigh batting for 124 in the penultimate over.

After the match PPCC took over the club house for the tour awards presentations. As an appreciation gesture, the committee arranged for each touring member a small memento from the tour. Each member received a medal from the club chairman Rajiv. This was in addition to the specially commissioned ruck sacks that were given to each member at the beginning of the tour. The next awards were the bronze, silver and gold awards awarded by the captain and vice captain. The first award was the bronze award which was awarded to the tours very own Paul Choudhry, Dave Persaud. Dave has previously played a handful of games for PPCC, and when numbers were running low for the tour, Dave stepped in and helped out. Dave provided the comedy element to the tour and was at the forefront of the banter, and despite his brief history with the club, he blended in like a veteran.
The silver award was awarded to Rtesh Verma for his contribution with both bat and ball on the field and his much loved off the field contribution. Ritesh has played for several seasons for PPCC, and is highly valued member of the squad, not just for his cricketing ability, but also for his “Why always me dude” persona.
And finally the gold award was given to Hitesh Patel for organising and leading the off field activities. Hitesh is an old timer of the club. His selflessness is evident in the way he puts club first, and like his bowling style, is happy to make sure whatever opposition is in the way, they are given the full juice treatment.
The next awards that were given were special thank you awards, the first of which was given to Hitesh Patel for his contribution for organising the transport and doing the bulk of the driving. Hitesh was awarded a bottle of champagne.
Next, Harish Patel was awarded a bottle of champagne for organising the whole tour. Harish spent umpteen hours, days, weeks and months to ensure the tour went smoothly, and without his hard work never, mind the tour being successful, the tour suggestion of the tour would never have taken off.
Finally, the last and most prestigious award of the tour was the champagne moment of the tour which was awarded by Harish as the tour manager. This award would be awarded to the individual who made a lasting impression on Harish, and it did not necessarily have to be on the field of play. There were many candidates up for the award, there were many memorable moments, but ultimately the person who made a lasting impression on Harish (and may do so for a while) was Vijay Jani for being sporting and donning the purple and yellow female plumbers outfit complete with purple wig as part of his stag do put on by the club the previous Saturday night.

After the awards ceremony, as per true Priory tradition, a few beers were shared with the opposition. It has to be said that all three opponents we faced upheld the true spirit of the game, excellent banter, and excellent hospitality. It’s not every day a bus load of Asians dressed as Barney the Dinosaurs turn up on your doorstep to be welcomed with open arms, and it goes without saying it was greatly appreciated.

And then that was that. The bus was reloaded for the final time, and the team headed back along the M4, back to reality.
Overall, as put by club chairman Rajiv, this tour was the most successful of all time. The laughs, the banter, the physical pain shared by all will stick in the memory for years to come. I recall a quote someone mentioned to me during the tour: “The great thing about this tour is that we have not just turned up as players who love and play cricket, but we have turned up as friends and brothers”. It was a great sight to see 11 players either dressed in purple, or whites, or in our party gear, walk side by side and enjoying each others company, and also the company of others we came across over the weekend.

For those of you were counting, yes Parm was collected from the long shade position, and the new position has been forwarded to the MCC to include in their new fielding manual.

And finally, Rajiv, so did you work from home on Monday, and did you want a flake with that?