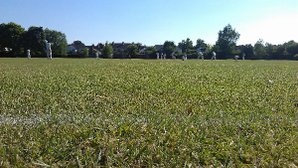 Who said that the art of spin was dead? After a season where Priory’s six pronged pace attack have dominated headlines they unleashed a triumvirate of spinners onto a dry dustbowl of a surface.
In scorching heat the day’s cricket was a trial by spin with the twirlers on both sides testing batsmen’s patience, footwork and mental ability against a variety of threats

The home team had Gary, a bowler whose pace makes Vijay Jani look like Brett Lee. He bowled a slower than slow ball with loop, flight and sheer frustration as his key weapons. Sri was a quicker bowler with an Anil Kumble like flat trajectory, subtlely changing his grip and flipping the ball quickly into the batsmen.
Priory were lucky to have the services of Subbu again, after his heroics against the Lankians much was expected of the top spinner on show who has a normal leggie as his stock ball but also the much maligned doosra and flipper in his armoury. Priory were also lucky to have gems such Ganesh, a floaty bowler who relies on release with a beautiful flick of his wrist and Shakeel who combined flight with drift and genuine off spin

With so much spin on show and a very unresponsive surface Priory’s quick men put their feet up. Only 7 overs were bowled by Ritesh, Vasa and Junior combined, the fact that they achieved fairly lacklustre results vindicated stand in skipper and soon to be married Vijay Jani’s strategy of Spin being King

The match was a time game of sorts which takes a bit of time to adjust too and after winning yet another toss Priory elected to stick to their status quo and bat first. Time was certainly not of the essence for Priory openers Tejas and Punit as they sped along at 5 an over. Punit’s batting was a revelation, a real technician of batting Punit has endured a difficult season to date and a short break coupled with a new bat seemed to have removed the shackles from his game. He presented the full face of the bat to good balls and ferociously pulled the short stuff to the boundary with a cracking sound resonating from his new piece of wood. The question on people’s lips was whether his new found form on the pitch would transfer to off the pitch too!

At 56-1 Priory look well set for a competitive total, it was at this point however that Whittington introduced a type of bowler that is rarely seen around the world. Gary bowled 12 overs of the most annoyingly frustrating slow bowling seen this season and yet you could see that he thrived on it, revelled in being able to slower each ball. The slower he bowled the quicker Priory’s batsmen fell.
Priory played him in fear, petrified of this snake without any venom as Gary hissed his way through an inexperienced middle order whilst grinding the run rate to halt.

Batting has been a strength for Priory this season however it has relied on batsmen getting in going on to score 40’s or 50’s, today Vijay, Ganesh, Vasa and Junior all got into the teens with their eye in but eventually succumbed to the wiles of spin. It was certainly a case of what might have been and when the stand in skipper was out at 89-7 Priory were in trouble of not reaching 3 figures against what can only be described as a frustrating opposition attack

Ritesh’s claims to be moved up the order have much like his bowling, gathered pace through the season. With Priory reeling at 89-8 he took responsibility and batted sensibly combining aggression and accumulation as he scored a critical 27 runs (no one score higher from both teams). His calm demeanour at the crease with bat in hand is certainly different to the raw aggression he shows in the field and with the ball, perhaps batting is his zen and today he reached his Zenith with crucial runs in a pressurised environment.
With some support from the lower order Priory were eventually bowled out for 136 in 35 overs. Gary taking an outstanding 6-28 off 12 very slow overs, figures to dream of

Whittington had around 35 overs to chase the runs (time restricted this to 33) a meagre 4 runs per over which is the modern day test match run rate. They played out most of their innings like they had just turned up from the Oval as they crawled their way to 119 runs in 33 overs.
This however was anything but boring cricket, a throwback as the older generation would say to an era when patience ruled the roost and tight low scoring games on deteriorating wickets created a type of excitement in stark contrast to the run fest’s the game is now used too. Today’s game turned into one of these low scoring thrillers from the ages

Toppi opened up for Whittington and just as Gary was frustrating as a bowler, Toppi was infuriating as a batsmen. Playing and missing on countless occasions, adjusting and re-adjusting his chest, arm and thigh guards almost every ball coupled with some glorious through the line hitting.
Priory’s skipper quickly understood the nature of the pitch and opened with Kuni and Subbu’s leg spin. Kuni bowled with some good control, varying his pace and line by switching from over and around the wicket. He picked up two crucial wickets one caught behind and one caught at short mid on, the fielder meticulously placed by Priory’s stand in skipper.

The first of Kuni’s wickets was a beauty outside off stump bowling into that corridor of uncertainty, the channel that creates all sorts of problems for opening batsmen. The catch was taken by Priory’s fifth choice wicket keeper Tejas. With all four regular keepers out (rumour has it they have made friends with the tube workers and decided to strike) Priory started the game engulfed in a wicket keeping crisis. Vijay used his instincts to utilise Tejas as Priory’s stand in. Priory’s best batsmen who can also bowl at the death and catches and fields like a dynamite, yes you guessed it can also stand behind the stumps and keep like he has been a keeper all his cricketing career. We hear of the modern three dimensional cricketer but Priory must have unearthed the very first four dimensional cricketer in Tejas Thakkar

At the other end Subbu was in his element bowling on a spin friendly pitch offering assistance to his wonderfully controlled leg spin. Subbu was unplayable as he dried the runs up and combined accuracy with variety, his spin was almost too good for Whittington as the edge of the bat refused to meet his cunning ball. He picked up the key wicket of Toppi who seemed like the only player prepared to play some strokes and also had their number three playing around his pad to a straight one plump L.B.W. Unfortunately for Priory’s bowlers this was the biggest trigger movement Whittington’s umpires would make for the remainder of the game

Vijay had to make decisive bowling changes with so few runs and overs to play with his captaincy had to be creative yet ruthless at the same time. As Whittington went into their shell he tried to use his quicks as Vasa and Ritesh came on alternatively whilst spin remained the constant from the pavilion end. Here the controversy began as Vasa clearly had Sri caught behind and when replaced by Ritesh the following over the same batsmen was plumb in front, clear for all to see apart from a motionless umpire

Things continued to get heated throughout the innings as LBW’s and very obvious catches behind the stumps were given not out much to the disbelief of Priory’s fielders. Whittington had clearly arrived to the conclusion that they would be doing whatever it took to not lose the game
Runs were being leaked every now and again and the skipper along with the brains trust of some of Priory’s more experienced fielders made clever decisions on bowling changes and field placings.

Slow was certainly the way to go and with spin being king Priory found two more willing exponents of the great art as Ganesh and Shakeel were called on to support the sublime Subbu. Wickets continued to fall at regular intervals as Ganesh showed glimpses of what he can do and Shakeel, an untested bowler bowled with flight and authority, both confident of their ability to control the match situation. Ganesh taking the key wicket of Sri who matched Ritesh’s total of 27 runs for Whittington, wearing jeans in the baking sunshine this flighty bowler certainly had some tricks up his sleeve as he spun the ball with great abandon. The home team’s batsmen were just as stubborn as their umpires as every ball was defended as if their life depended on it, I have never seen a batsmen get such a rousing reception from his team mates after being bowled out but this is what was given to Andy after he defended vigorously for a 30 ball duck that inched Whittington closer to their now obvious goal of a draw.

Subbu returned to take another wicket and catches were being taken at will by Priory’s fielders determined to avenge the injustice served up to them by the home team’s umpires. Punit ‘Jonty’ Jani took a good catch at square leg and Kuni evoked memories of Kapil Dev’s back peddling catch to remove Viv Richards in the 1983 World Cup final. It seemed that the final rites were now being performed and a well-deserved victory was in Priory’s grasp. 2 overs to go and just one wicket needed but very resolute batsmen at one end and a defiant umpire at the other, challenges lay ahead

Subbu could not claim that all important final wicket as he beat the edge of the bat relentlessly, edges fell inches short of diving infielders and loud appeals were quickly rebuked. The tightest of games now had just one over to go, one wicket remained for Priory, runs were now irrelevant for the home side as they had resigned themselves to performing the great escape. A final game defining decision rested on Vijay Jani’s shoulders, who should bowl the final over of the game? Spin was being blocked and with decisions being overturned by the umpire it seemed the only way the get a wicket was through a clean catch or being clean bowled. Perhaps pace would finally have a say in this game as Priory requested a final big effort from their tall fast bowler Ritesh, leader of the attack and with enough pace to beat a batsmen’s defence and enough bounce to try and find a leading edge

Vijay set an umbrella field of 6 slips in addition to a short leg, the fielders were ready and Ritesh came charging in. He tried to bowl his normal length which was probably too short for what was required on this pitch, the batsmen put everything behind the ball to block away the final deliveries of this blockbuster of a match.
Yorkers were needed but the edge just could not be found and the home team’s defiance paid dividends as they squeezed and squirmed their way to a draw.

It was clear who the moral victors were and Priory knew in reality they had probably taken 13 wickets but were let down by some poor umpiring. A sour note to end a fantastic contest