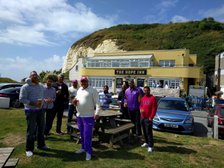 The first few over were bowled at the Hope Inn pub next to the ground and right by the English Channel with our opposition West Wycombe CC who were also on tour in Brighton. We then moved onto the ground for another few juices with the opposition. Starting slightly later than expected we decided to reduce the game to a 35 over match. It was a slightly overcast but very windy day.

We decided to have a bowl first and with Harmy dropping out the opposition kindly lent us one of their bowlers (Dom) who was a big help (with the ball).

Junior and Dave opened the bowling and kept it very tight both finishing with great figures. Junior 7 Overs 4 maidens 22 for 2 and Dave 7 overs 2 maidens 7 for 2!
We were treated to a special bowling spell by Parm who if you do not know bowls as slow as me but with a deadly loop and rip that gets the juice out of the surface to deceive the batsmen. He unfortunately didn’t pick up a wicket but bowled 5 overs for only 18 runs. Dom or DomDeep as Sabs called him our 11th man bowelled well and picked up 3 wickets for 24 runs off his 5 overs and took 2 good catches which defiantly kept us in the game Shakeel picked up a wicket and so did sabs. The opposition finished on 151 for 9 off their 35 overs.

We headed back to the pub for lovely lunch which was really well put on by the pub itself.

Sid and Sabs opened the batting but I think Sid had his eye on the Juice so was out cheaply for 1 run. I was in next and put on a 50+ run partnership with Sabatini. Sabs took the attack to the batsman but played very sensibly balancing his attacking flare with his defensive play. Sabs eventually was caught behind for 30 runs by one of their quick bowlers who put a bit of extra bounce into a delivery catching the edge and being taken by the keeper at the 3rd attempt.

Abhi was next in and played well for a few overs and saw off their openers. Abhi was bowled by a slower ball but did a good job of keeping out a few very good short deliveries from the opposition. Hambo was down at number 5 today to come in and play freely and he did just that hitting 3 big 6s during his innings. Me and Hambo batted well together keeping up with the run rate and slowly taking the game away from the opposition. We were 105 for 3 with 10 overs to go (46 needed to win) when I was eventually bowled out for 39 by their spinner James who was turning the ball 3 meters as per Dave’s quote. Next in was Sandeep and after a few balls playing and missing he was bowled in the same over by their spinner without troubling the scorer. Dave was up next but sent back first ball by another ripper from their spinner James Who now had a triple wicket maiden!!!

105 for 6 and we were in a spot of bother. Jun was due to be in next but because of the fast fall of wickets DomDeep was sent ahead of him. Hambo carried on playing well and was looking to bring the game home for us scoring his first 50 of the season for PPCC.

It came down to the last over and we needed 3 to win with James bowling. Hambo tentatively took a single off the first ball leaving Dom on strike. Dom was unable to get the ball away failing to connect with any of his shots. 2 balls left and Dom was out bowled for 5 by James and jun was in for the final ball. The field all came in to stop the 1 jun was unfortunately able to make a good enough connection to beat the infield and Hambo (56) was run out. We lost by 1 run which was very painful but it was a great game of cricket.

We didn’t dwell on it too long and decided to enjoy the night out PPCC style. As they stay what happens on tour so those of you who missed out will have to join us next year to find out.

Great Grace-full mini tour and thanks to all the players.