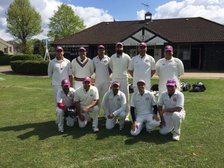 2017, Priory Park embarked upon a new adventure under new leadership and a revamped squad
With a colourful pre-season behind us we were buoyed by our excellent preparation and the newfound confidence that coach Darren and captain Dave had given a squad full of potential

Ealing Three Bridges were our first opponents of the journey and the sight of a roller, a good pavilion and a side a division or two above us was enough to illustrate to us that this would be no easy game
New captain Dave won the toss and after a rousing opening team talk we marched onto the field as Dave elected to bowl on a cool but sunny day

We were not sure how this pitch would play especially after being rolled but the more experienced members of our team noticed the cracks and immediately predicted unpredictable bounce. The message from the captain was clear, keep the ball relatively full and the pitch would do the talking

How right he was as our opening bowlers Kuni (Walsh) and Hamayoun (Harmy) heeded this advice and reaped the rewards of full and straight bowling. The opening salvo was a dream start for captain Dave and his team of champions. Stumps were flattened and Ealing Bridges batsmen fell in Three’s as they were soon 4 wickets down for a meagre 12 runs. Kuni, a confidence bowler had his tail up and as he picked up wickets it all clicked for him, a smooth run up, the perfect length and an economical line, all the right ingredients for a Kuni special spell of bowling

At the other end Harmy was a terrifying sight for batsmen who seemed to want to wield their willows at every ball bowled. They had either under estimated the skill and pace of Priory’s new ball pair or it was just ill judged early season madness but some of the shots played were not even akin to schoolboy cricket let alone top order batsmen of a division two side. Harmy and Kuni shared the first five wickets, all clean bowled but what followed next probably gave new coach Darren the most amount of satisfaction

Having given up several Saturday afternoon’s to try and drum into Priory’s players the importance of fielding practice and drills it all came to fruition in one swift movement of Hambo’s dynamite arm. He picked up a smashed square cut with ease and then with minimal fuss whipped out a throw which was soon being described as Viv Richards in his halcyon days of the 80’s to knock the bails off. Six down for around 50 runs and the innings of Ealing it seemed in tatters

Ealing’s premier batsmen then proceeded to tire Priory’s bowlers into the ground, the aptly named Dusty went on the counterattack and it seemed we had no answer to this onslaught.
During his masterful innings there was an incredible cricketing contest between Dusty and Harmy. Harmy quickly identified where Dusty’s strengths were and started bowling a middle and leg line to cramp the batsmen and not allow him to free his arms to hit his trademark drives. In coherence with Dave they packed the offside to deny boundaries and for a period the straighter line created an intriguing game of cat and mouse between Priory’s strike bowler and Ealing’s talismanic batsmen

Despite Harmy’s wonderful efforts Dusty was smart enough to know the plan and adapted his game, taking singles off Harmy and then attacking the bowlers at the other end. A change of tact and pace was in order and Dave decided to bowl his spin twins Rama and Rajesh in partnership to stem to flow of runs try and use the slow and low pitch to our advantage

Both our spinners probably bowled slightly too quickly through the air which effectively made some of their deliveries medium pace which was perfect on a pitch the slower bowlers would later thrive on.
Both spinners enjoyed some overs of relative economy however Dusty put away any bad ball and the run rate and now seventh wicket partnership was thriving and becoming a real threat to our position of strength. At the other end the number 8 batsmen played a calculated and careful innings under Dusty’s guidance as they started to make their way to a very competitive total

As their partnership grew some of Priory’s old frailties came back to haunt us as some poor ground fielding and a dropped catch (Punit you can buy me a pint next week!) pushed Dusty towards his century. Luckily for captain Dave he had an abundance of bowling options at his mercy and he brought on Vasa, Junior and Sabs to stem the flow of runs.

Luckily Dusty’s life didn’t cost too much as Junior swung into action with his off cutters, he was a bowler designed for this pitch and the wily left armer didn’t take long to understand what he needed to do to make an impact. A flurry of wickets (3 for Junior!) including the key man Dusty for a fantastic innings of 94 clawed the innings back for Priory and we ended up bowling them out inside their 35 overs for a respectable 179

The impetus and momentum was with Priory after that late flurry however acknowledging our batting deficiencies we knew we required a solid foundation in order to chase a challenging yet achievable total.
It was left to Sabs and Hambo to start the innings for Prior and give us the platform for this run chase and they certainly did that with a good opening partnership of 45 runs. Sabs was in full flow and what he showed in the nets was exactly what he put into practice as he milked the good balls for singles into the leg side and swatted and thumped away the bad deliveries to the boundary with his usual blend of power hitting and elegance. He maintained the majority of the strike and Hambo was happy to play second fiddle in seeing off the new ball. After doing this Hambo decided it was time to open his shoulders and played across a straight one to be bowled by Dusty

Dusty was Ealing’s catalyst player and he realised an opportunity to grab the game by the scruff of the neck by bringing himself on. He bowled a canny length and knowing the conditions as he did he extracted some movement and indifferent bounce whilst bowling a line that attacked the stumps. He tore Priory’s middle order apart with the wickets of Hambo, Junior and the key wicket of captain Dave. Harmy and Sabs created a brief respite before the spinners came on and created carnage and confusion to Priory’s lower middle order

Middle order collapses are synonymous with Priory and as it was with England in the 90’s we do have a tendancy to fold like a pack of cards especially once the slower bowlers have been brought on. Whether it is decision making or a belief that the spinners need to be attacked aggressively there needs to be a succinct change in mindset for Priory’s batsmen against these dogged spinners that we are likely to have to combat through the season. Harmy, Rama, Sabs and Rajesh fell in quick succession as Priory collapsed from 54-2 to 79-7. Sabs had played a delightful innings but the wickets falling at the other end may have impacted his concentration as he finally fell for a very well made 47, 3 agonising runs short of his half century

Vasa (12), Abhi (8) and Punit (22) brought a bit of respectability back into the innings under clear instructions from the captain to ensure we batted our 35 overs. Punit’s innings was a delight to watch, the self styled selfie king played some glorious shots including a cover drive his hero Tendulkar would have been proud of and pull shot for six which signified a return to form and indeed confidence for a player that Priory are so keen to score the runs his undoubted talent with the bat warrants

Kuni and Abhi saw out the final rites with some determined batting to ensure we were not bowled out. In the end it was collective a good performance and batting out the 35 overs to score 145 was no mean feat for the first game of the season. You could see it in the players attitude, mindset and confidence that this was the start of a new era for Priory however it is important we address the old failings of the past and build on the positives to create our success for the future