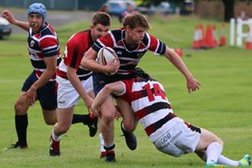 Over the course of the season we will be catching up with the entire squad in our version of TEAMMATES.

First up is our captain Chris Patterson.

WHAT IS THE BEST THING ABOUT PLAYING AT P&S: Great mix of lads who all get on both on and off the pitch. Canterbury stash helps too!

WHO IS THE BEST TRAINER AT THE CLUB: Tough one because we have a core of players who train week in, week out. Ill give it to Luke Masters, always puts 100% into any drills.

MOST MEMORABLE P&S MATCH: Despite the disappointing result, the chance to play at Kingston Park was a fantastic evening. Best win would be away at Wallsend last season.

WHO IS THE MOST SKILFUL IN THE SQUAD: Will Foster. He has all the handling skills and has a canny boot on him!

WHO IS THE QUICKEST: Tough one but id like to see a race between James Bradshaw and Danny Whiley, think James might nick it

WHO IS THE STRONGEST: Going to have to be Rob Reid, the man is a machine!

IF YOU COULD PLAY ANY OTHER POSITION WHAT WOULD IT BE: The best part of playing scrum half is that you’re always involved in the game so I’d have to play somewhere where you can get lots of touches, maybe 12

WHO IS YOUR FAVOURITE PROFESSIONAL PLAYER, PAST OR PRESENT[/b]: Big Mike Phillips. Anyone who can be the lions 9 at 6ft 3 gets my vote!

FAVOURITE GROUND: Murrayfield, I just love the walk from the city centre to the ground and the atmosphere is always class

Next week we catch up with our big number 8, Yannick Debil