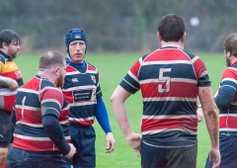 Last game of the decade sees Seaham take the spoils

P&S welcomed promotion chasing Seaham RUFC to Stocksfield determined to finish 2019 with a strong performance against a side sitting near the top of the league. The home side were boosted with both Adam Murphy and Ryan Chamberlain recovering from leg injuries to start in the front row and Jonny Kelly made his first start for the club at blindside flanker. In the backline, Joe Hughes started at 12, allowing Danny Whiley the opportunity to attack from the wing.

The initial stages of the match went according to script with a tough physical encounter ensuing. The visitors were competitive around the breakdown and looked to disrupt any flow the Ceres Energy sponsored side created.

Despite this, strong carries from the forwards set a platform for many attacks. From a sniping break the first try of the day went to the home side. Getting themselves firmly in Seaham’s territory, patience was the key as P&S went through many phases around the breakdown before Yannick Debil crashed over. 5-0.

In what was a testament to the way that P&S had started, they immediately returned to the Seaham half with some fantastic support and offload play between Luke Masters and centre partner, Joe Hughes. Unfortunately for P&S good scrambling defence forced the error and stemmed the flow.

After absorbing lots of pressure, Seaham brought themselves into the game and started to show the reasons why they look promotion favourites. Some breakdown infringements allowed the impressive Seaham 10 the opportunity to kick deep into the 22, and from the resulting lineout, an unstoppable rolling maul was scored by the visiting number 8. 5-5.

The visitors then scored a try much to the frustration of Coach Russell as poor home side defence allowed Seaham to score from kick off. Easily claiming the restart, the visiting winger broke through a dog legged defensive line before passing inside to the supporting 12 to score. 5-12.

Continuing with the tough physical encounter both teams then lost a player to the sin bin with the Seaham 4 and Jonny Kelly exchanging friendly blows before Seaham extended their lead to 5-15 at half time from the resulting penalty.

Disappointingly, the 15 minutes after half time showed the difference between the two sides as the confidence the visitors have and their ability to put their chances away proved dividends. Firstly, a good team try was scored in the far corner where the ball went through many phases and sets of hands before another unstoppable rolling maul went over in the corner following a 5-metre lineout.

P&S didn’t go down without a fight however and like other weeks demonstrated their ability to score under the posts. Good set piece ball was won by David Rodgers and the forwards took charge and drove upfield. Again, patient phases tied in the opposition before quick ball was recycled to Joe Hughes who crashed over. 12-29.

Struggling to return to the Seaham half , the visitors had the final say on proceedings, as firstly their man of the match flanker scored a try his performance deserved after a long deliberation between the referee and their captain before their 10 danced his way under the posts to make the final score 12-41.

A disappointing end to 2019 where P&S failed to deal with the abrasive play but can be proud of the never say die attitude that all players showed. Well played to our visitors and good luck for the rest of the season. We look forward to the return fixture later in 2020.

Thanks, must go again to Anna’s New Life Furniture for sponsoring this fixture. Your support so far this season has been fantastic and we are very appreciative. If you haven’t headed across to their website please follow this link: Anna's New Life Furniture

Merry Christmas to all our supporters and avid readers of the reports and we look forward to seeing you all down at Stocksfield in the new year.