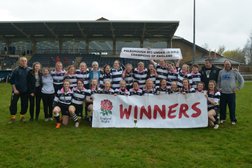 After considering the options for several seasons the Pulborough girls section had its inaugural session on Sunday 30th October 2011. We had 13 excited girls attend this first session and have to beg steal and borrow kit, coaches and playing space to make this happen.Little did we envisage from this humble and inconspicuous start would we grow year on year to be one of the largest girls sections on the south East
of England.

In the 6 seasons we have been running we have been bowled over with the drive and enthusiasm of the girls and the patience and time given by the coaches and parents.

In charting our progress we have built up from the 13 players in 2011 to now having just under 100 players at under 11's 13's 15's and under 18's. For those uneducated in the girls format ages are banded together although as the game grows this may change.

When looking back on our History to date one of the most key changes was pooling the resources of the SSB club and ourselves in 2014. At his time they had numbers at 18's and the coaches and we have 4 or 5 key players with minimal coaching resource. This coming together ignited the section and with our growing numbers in lower age groups provided a firm foundation for the future.

The success on the pitch has been remarkable and is a due credit to our girls but also the quality of the coaching. We are now recognised across the country as a club that plays high quality rugby with the clear values of everything good about Rugby rolled in. The major honours started in season 2014/15 when the combined SSB/Pulborough under 18's won the National 7's competition and reached the semi-finals of the National cup

The success however does not stop there and we have seen our players grow and spread the good word that Pulborough a great nurturing environment to develop high quality rugby players. We have in the last 2 years seen

It is not just about the older girls too! In March this year (2018) our
newest addition under11's won their first tournament at Guildford. Whilst we
have had many highlights there are still many to come.

Indeed or next step was to evolve from the girls game to that of the Women's and In October 2016 we started Thursday training for ladies. In just over a year we have seen some great progress and this season they joined a development league and have managed to turn out for every game. Whilst the results don't always go there way they love playing and with the support of the club and growing number of players I am sure they are destined for great things too.

Finally the Women and Girls know that the progress and development would not have been possible without the support of the whole club. We feel very proud to be part of the Pulborough Family.

Pulborough Ladies and Girls. Seven Years in the making