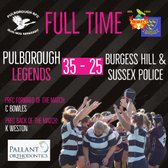 Pulborough Legends start with a win!

Sunday saw the start of the women's 2nd team journey.

Sunday saw the start of the women's 2nd team journey. The Women's development team - aka the "Pulborough Legends" - travelled away to a very sunny Burgess Hill.
Playing 10-a-side and starting facing in to the sun, the team got underway. Conceding a try early, the women switched on their Pulborough determination to score quickly in response, and even things up. The Legends scored 3 more tries in the first half, with new player Bea looking dangerous and scoring 2 tries in her first ever game of rugby!
Some hefty tackles put in by the Legends and some strong defence meant they finished the first half ahead, 10-20.
The second half saw Pulborough score another 3 tries, while quick footwork from Burgess Hill meant they scored 3 of their own, taking the final score to 25-35 to the Legends.
Legends Captain Carrie was extremely proud of the team which included 3 debuts, who all absolutely smashed it.
Forward of the Match was Clare and Back of the Match was Keeno.
Try scorers were Bella, Hannah, Keeno, Bea and Elisha.
Share via
FacebookTwitter
https://www.pitchero.com/clubs
Recent news