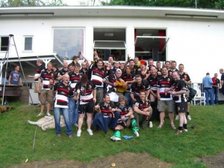 Vorsprung Durch Technik it wasn’t, bloody good tour it was.

2 Missing in action (1 at the airport on the way out!), 1 hospitalised, 1 arrested, 2 escapees across the borders and 2 desertions. Pretty good stats for a 4 day end of season break and pretty much all on day one!

96 hours of drinking was crudely interrupted on Saturday afternoon by 40 mins, yes 40 mins only, of rugby against the ASV Koln Crusaders. The side selected took 15 mins to run the beer sweats out, once this was done and water (via a hosepipe supplied by the quick thinking Doyley) was taken on board, we began to play.

Winger Tom Casey was the Pin to Tom Reddington’s Chip as on 2 occasions he followed Poo Leg’s kicks and touched down to score – resulting in a naked lap at the day’s Court session. S Club then ploughed over and moments later Coxy thundered across the whitewash. At last the team clicked and we started to warm up the Antiques on the touchline.

But all was in vain as the oppo gave up and went home 24-0 down. Apparently there were strong objections from their coach about disrespecting them and not taking the match seriously. “You turned up without proper smart shirts (all in attendance were in tour shirts) and ties, were all totally drunk and continued to drink until the game started” eh, yes, hellooo it’s a rugby tour…. “also you weren’t taking the game seriously enough and when you did you were violent”

Well Herr Jones if guilty as charged, we wouldn’t have been 24-0 up and several of your offside players would have been in the hospital bed vacated by GOB the night before. Perhaps next time we should turn up ready as if it were a league game and see what you would say to being 70-0 down at half time. Alles Klare mein liebchen…

Anyway, a big Danke to Chopper and his cohorts for organising an “Old School” tour that hit all the right buttons. Congrats to Pete Doyle for his best ever yet attempt to be a mini Al. Well done the virgins who accepted their plight well and graduated to proper tourists. Somehow I think that it won’t matter what The Mess does to graduate the goalposts will always change, but well done anyway you were good value (at least €uros 50 worth, if a little soiled).

Kojak your vanity never ceases to amaze me, but on reflection - it was your own hard earned cash you spent as you filmed yourself having a fish supper on a Friday, what a good Catholic boy you are. Has Brenda woken up yet? Plank you were a very good baby on tour well done. Odd job if ever a nickname suited its owner it was yours.

The Gimps’ YMCA was undoubtedly the funniest thing I’ve ever seen and a big up to all that took part.

The Cripps triplets - Big thanks to Crippsy for carrying the whip for the duration, big love to Paul for making a lovely room mate, those Hoff pants have scarred me mentally for life. And Crippolini, one day a bar dive will work and I hear you’ve opened a PJF RFC office for the Petula Clarke appreciation society (##Don’t sleep in the Subway Crippsy##)

Well enough of the in depth detail, I’m sorry if I missed something you thought would appear, but at least we’ll have something to talk about at the Club next season.