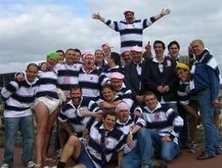 – especially the Pink one given us as part of our Tour kit. And so resembling a regiment of Gay Paratroopers we mustered and were soon on the Paris Gard du Nord bound Eurostar awaiting the inevitable late arrival of Dave “No Phone” Hastings.

Within minutes of the train’s departure, the Red wine and Champagne corks popped and there began the true start of tour. Strangely enough ordinary passengers that thought they had the seats that we were occupying, didn’t put up too much of an argument and moved on to other carriages.

It wasn’t long before John Andrews had misplaced his passport (ref Cologne report 2007) and began his usual search for said document. The Mexi dice boys were very soon into their swing and Big Al patrolled the carriage with at least 3 bottles of France’s finest Red. The mood was boisterous and many outrageous French words were being muttered.

Paris was upon us very quickly and as we disembarked we faced the trek across town to Paris Austerlitz Gare. Al wasn’t able to move any further and so via La Place De Les Invalides he was steered onto the Paris-Limoges train.

3 hours later Limoges loomed into view and the swaying crowd alighted at Platform E. For some reason the platform objected to our arrival, took a cheap shot, and leapt up violently and head butted Al when he wasn’t looking – merde ! As we collected in front of the station and waited for our transport to the Hotel, not satisfied with red wine alone, Taff and Chops decided to swap some Punch that they brought with them.

And so onto the first night out on tour – unfortunately it was a bank holiday and the majority of bars, clubs and restaurants were closed. We managed to find a bar where we were able to re-group and move on. An Italian restaurant sat 20 of us down for a fine meal. As we left Wilson N decided that he would do so via the window which creaked and crackled under his weight. A pub club across from the restaurant kept us amused for several hours.

Day 2 saw the front row room pairing of Bruck Senior and Tuckshop hit the local market for breakfast – fresh eggs, spicy sausages, black pudding and a crusty French loaf sated their appetite as they adeptly cooked the goods from their basket in their apartment.

A coach trip ensued as we collected Charlie Fish from the airport. Once at the impressive St Yrieix ground we were entertained to lunch – please refer to Alan Frei for the fare we had. And so with full bellies and in soaring heat we took to the paddock. We started quite well and then all of a sudden this vision of an opposing fly half/full back began ghosting round the park, floating along the surface and thumping the ball with extreme accuracy (and distance) all over the park. He soon sussed out that if he spun the ball wide to his speed merchants on the wing, his side would win. And so with the scoreboard ticking over in time with the clock we found ourselves on the back foot and 27-0 down at half time.

During the second half the tourists fielded 6 third team players in effectively a first XV match, oh and the vision on the other side turned out to be a Romanian International. The score in this shortened period was 20-14. Firstly James Leigh thundered across from some 20 yards out and then Nick Wilson pounced on an error under the posts to score our second. Charlie converted both tries. Regrettably the match was lost 47-14 – the first time a PJFRFC side had lost on Tour.

After the presentations and speaking bits we headed back to Limoges where we gathered in the Bar Barbarians Bar. Upon closing a quick yomp got us across town to the Spanish bar where we saw the night and early hours of Sunday out.

Dimanche - After another finely cooked petit dejeuner in room 503 was consumed by the occupants, they donned their outfits for the days fancy dress parade; and as Fred Flintstone and Swine Fever they began to assemble the other characters – Zorro, the Pope, Lord Nelson, a Chef, D’Artagnian, the Pirate, the Clown and a slowly melting Smurf. Soon these were ensconced in Chez Monique and the days beering began. As the morning unfolded so a various assortment of chaps crossed the medieval bridge- a cowboy, 3 more smurfs, another Fred Flintsone, Papillon, a rather original French onion seller, Spank my Monkey (?), a chav. The surreal moment was when a local’s car needed a push only to be aided by a Smurf and a cowboy, leaving 2 perfect blue hand prints on the boot.

Another yomp across town soon had us in the middle of the Marche at a gay(?) bar. Any doubt about this should be addressed to PJ who, dressed as a Roman Emperor, was growled by a rather rotund, moustachioed, French Partisan. It was odd to see Lord Nelson and the Pope consuming a saucisson baguette deep in discussion about the days state of affairs.

The Irish Pub was eventually found and we got our loyalty card stamped at last. Cowboy Dave failed to convince the doormen at the Gay club that he was gay and wanted to be allowed entry. Poor Tucky run out of playmates at 1pm and so serenaded his roommate with “I’ve played the White Rover for Many a year” – “ I visited a Horse house I used to frequent” I knew that if I left him he would burn himself out and fall asleep- after 10 minutes I wasn’t wrong.

Another year touring done – the Tour of Firsts – first loss, first time Al used a toilet, first time the last night meal was eaten on the first night, first time we didn’t have to pay any excess for hotel damages.

One special mention must be made to Brookesy and Hastings – the PJFRFC version of Waldorf and Stadler - without who’s bright witty repartee, continuing optimism and ability to see good in every situation should be an example to us all. Some called them the SAGA tourists but I thought that a little harsh as they had actually been sponsored by ZimmerFrame.

A quick statistic for you :-

Again big thanks to Nic “Choppa” Potter for bravely organising the trip, Nick Wilson for his liason with St Yrieix and Alan Frei for translating so beautifully.