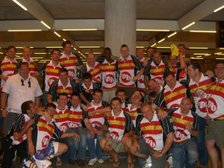 I'm not saying that Majorca was particularly different form other Club tours...

but when my doctor congratulated me for having some blood in my alcohol system, I knew we had achieved something special. It was further brought home to me on Thursday after Tour when in a business meeting I buffaloed my Manager for drinking his Starbucks coffee right handed, pi**ed down his leg and engaged my colleagues in 3 verses of " On The Fields of South Antarctica" !!

And so the Brethren cast aside the disappointment of losing the playoff and assembled at 3:30 am at Gatwick Terminal South, on Friday 9th May. Tour virgins were early on the case collecting the tour's first whip and raiding M&S of their own brand lager for the collecting masses. Chopper had excelled himself in providing a reversible Tour shirt that suited all occasions, Tour colours and insignia on one side for day wear and a rather smart dress shirt and bow tie on the other for evenings.

The flight passed over quite well as the usual game of Mexi , hosted by Alan "Clown Boy" Sillitto, claimed a couple of early victims who had to drink from the Tour Chalice containing the Holy water - whisky, baileys, vodka and peach schnapps. The usual antics in the baggage reclaim area endeared us further to our fellow travellers and eventually when the coach arrived we were on our way to the developing Majorcan resort of Magaluf. Virgins were subjected to naked sky diving assuming a position that left their genitalia resembling a Boxer's speed ball.

11am saw us at the pool side bar where Tors led the first rounds of swimming races and the inaugural PJF Iron Man competition. Dom O'Shea (yes it was Dom and NOT Luke - Ed.) as a PJF Tour Virgin had avoided the Sky Diving and in recompense was advised to run round the pool in his Birthday Suit. In doing this he attracted the attention of many of the on looking Hotel guests who's balconies overlooked the pool complex. Thereafter began the rain that was to plight us for the rest of the Tour meaning that we had to drink indoors as opposed to outdoors in the expected, by not present sun. "The water in Majorca often falls where it ain't ought a" Prof Higgins, My Fair Lady.

Eight hours of stagnant drinking saw us leave the hotel and populate the Oasis bar directly opposite the Hotel entrance. Soon afterwards we managed to get to the bottom of the hill (about 400 yards from the hotel) where the compulsory Irish Bar, Mulligans, was used to sate our continuing thirst. Burger King, opposite, enabled us to ensure that our Tour loyalty cards were duly stamped.

The rain continued and the group dispersed about 1am, as we were evicted from the Irish Pub. Sitting on the balcony of the bar next door, Tour Seniors whiled away another couple of hours watching the nightlife go about it's routine. Dave The Bailiff being bitch slapped by a bitch over a Taxi, help would have been given but it was raining rather hard at this point; the wet T shirts on display as various hen nights trouped passed in the torrential rain on their way to other bars and clubs (pity those that paid to get into a night club that offered the same).

And so match day. The missed coach, courtesy of a sneaky Barking RFC, saw us arrive late and disorientated at Alcudia after an eventful trip. Again the rain hailed down as the brave few took the paddock and played against our hosts Corsaris RFC. A shaky start saw Tors give an intercepted pass to their winger who ran the length of the pitch to score. We finally got our act together and through a determined effort from Scotty, who having sat down in fairly definitive terms, in front of the crowd, Mr John Andrews, we managed to pull level. This was after Tour Star - Tukey - had gaily prepared his celebration before grounding the ball and spilled it once across the line. He made up for this with a solo effort that put us 12-5 ahead. Continued pressure from the forwards saw Tour Guest John "Scary" Mitchell thunder across from several yards out and resulted in a 19-5 win. Man of the Match was Dom O'Shea who led from the front at hooker and showcased his deft rugby skills. On the touchline the spectators witnessed a rather sad and definitive moment as Alan Sillitto burned his boots.

We adjourned to the old walled city of Alcudia town and passed a pleasant early evening in the Sun (!!). Mass was held and now I know how to get the attention of a group of drunken, boisterous Catholic boys. Father O'Shea conducted proceedings as the Cardinals went through the process - thereafter voting began on Pope Idol. Poor Dave Lorraine suffered at the hands of some unscrupulous bird, who had the audacity to S**t on his shoulder while he was asleep, Dave would have taken issue with the culprit only he was gaffer taped to his chair at the time....

The night saw us back in Mulligans.... "Don't get me wrong your great custom, but when you start getting boisterous, it's the other customers I have to think about" Danny Manager of said Mulligans. We survived until 3am this time. There was 800 kgs of pure Pightle Beefcake ( The Brucks, Mr O'Shea and Ceb) dominating the middle dance floor, playing hard to ignore all night long. Well we had a good time and thought we were good. KFC was the restaurant of choice this night.

And so to Sunday and the fancy dress parade. Poor Jesus was crucified on a suitable tree, poolside at the hotel. Gaffer taped and cling filmed 3 foot off the ground for about an hour - subjected to much ridicule - humility is a great thing. Great effort by all, it was a very funny day/night as we showed Magaluf and the hordes of dressed up Stag/Hen and birthday parties how exactly to dress up.

So God, the Pope and Superman were in this bar when Elvis, 2 monks and Captain America walked in. As a group we attracted much attention and probably the funniest situation was when the Pope and a Monk were relieving themselves and a stranger came up to the Pope and asked for forgiveness (ha ha ha), duly forgiven the stranger said " so you'll make sure that this is alright with God then for me will you ?" to which the Pope said "ask him yourself, he's sitting at the bar having a pint..."

The trip home wasn't without event, as we had to leave Fred Flintstone behind due to a lost passport. At this juncture the Hulk had many words of advice having done this the previous year in Cologne.

As usual a brief outline, not too much detail but I hope just enough to remind us and whet the appetite of others.

Good tour boys. Well done Chopper and his committee - you're to be congratulated.