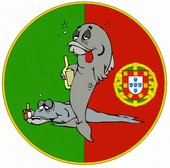 "Large Glass of Pinot Grigio, please barman" and so the PJF RFC 2010 Lisbon(ish) Tour started at the Rectory in Purley on Friday 21st May at 12 noon.

The assembled throng languished in the sun as the numbers grew and expectation of a splendid weekend away loomed. Several large glasses of PG later the cabs arrived and quickly whisked us down the M23 to Gatwick - so far no dark ashen clouds around so all was well. We checked in and caught up with the few that went direct and were soon ensconsed in the airside bar quaffing ale.

The usual course of events followed - young virgin tourists rushing around like little pups, full of energy, those that had been on 2-5 tours scampering around after them trying desperately to look grown up and mature, and then the Silver backs, mumbling away about marathons and not sprints and we'll see who's still going come Sunday afternoon, blah blah, blah.

The flight itself was quiet, with the exception of 2 events. Firstly virgin tourist - Chris Roberts (Ollie's mate from Uni) - availed himself of the plane's toilets to throw up everywhere. The air waitresses ran from the site as if a nuclear bomb had gone off and returned equipped with gloves, aprons and face masks as they attempted to clear up the debris. Secondly the driver had to abort the landing in what was described as a “normal operational procedure” - “normal” was defined later as being the act of avoiding landing on another aircraft that was still on the runway. The lurch, immense kick in of power and the 90 degree angle of correction was enough to waken Bruck Snr who until then had been soundly asleep for the duration of the flight (ref the several glasses of PG mentioned earlier).

It turned out that the driver was a bird - so for aborted landing attempt read inability to master parallel parking. On disembarking the heat hit us and we realised that dehydration could present a few issues this weekend.

Karen the rep met us at the airport and put us on a coach. The tour was quiet as the coach only stopped once for the driver to complain about the Naked Sky diving for virgins. Again Chris Roberts excelled himself by managing to smash both his nose and knee when landing. The young virgins shouted several songs for us to baulk at - in particualr was one about doing something to a nipple and a tit.

We checked in at the hotel, dumped the bags and headed into Estoril's night life - very pleasant town on the coast just north of Lisbon. Large Casino ( influence for Casino Royale apparently ) nice, bars (Piccadilly Circus in particualr) and lovely beach front.

As we sat and began the evenings rehydration programme, Nightmare began to work his charms on Karen the Rep. It was funny as he got absolutely nowhere with any of the usual lines and reverted to just being good friends. At about 2pm the youngsters had had enough and were itching to move on so cabs into the next town Cascais were taken and the Iiieerish Bar was patronised. The Old Goats remained behind reflecting on their glory of trouncing the youngsters in a boat race.

At 3pm ish the group assembled in O'Neills (tour loyalty cards stamped) and then went on to the night life. At this stage the town was littered with bodies that had crumbled under 16 hours of drinking. Marathon not a sprint. First nightclub was Eastern European Mafia territory as the burly bouncer repeated " No Come in, too many Mens". So we went next door where we were greeted with open arms.

At 4.30 yours truly wended his way back to the hotel courtesy of the nifty neck pass issued to all at the Rectory which had the name of the hotel on it - brilliant. Unfortunately the cab driver didn't want to go to bed with me nor would he take it up the back alley - sic. useful local phrases on the tag to help us out when we needed it.

Breakfast consisted of a couple of dried bread rollssh, shome scheeses and hams. We adjourned to the Piccadilly bar across the road. Here we learned the tour photographer had a problem "someone stole my camera". A couple of beers were taken on the beach and we then went to the game.

We played the Lisbon Casuals, one of Lisbon's 10 senior sides. They are made up of ex-pats and can not compete in competitions because they have too many foreigners in their side. They were to date unbeaten and were no slouches. However our preparation took a setback as Shirtgate gripped the party and DC had to get his teeth out.

It was interesting to hear the pre-match talk about the oppo being a mickey mouse out fit.... this coming from PJF's resident Nun Sister Brown, when discussing it with Tango Boy, a Nurse and Minnie Mouse - pot kettle sprung to mind.

And so to the game - interestingly enough neither side was going to be intimidated and as a result Munch was prescribed a diet of decaf coffe and meat that was well done. Phil Jones deservedly won MOM, for a storming performanc scoring 2 of our 3 tries as we went on to win 15-5 and take their undefeated record away. Loz Harrison at wing sublimely ghosted his way around the park and scored our other try. Of the old guard, Cripps M revisted his youthful past with a fine display, tackling hard and drifting in off his wing. Borze set his stall out early doors and sat his opponent down 3 times in as many minutes, he then sat himself down and talked with huey and ralph for the rest of the match. However the most memorable moment was at 17:13 pm on this the 22nd of May in the year of 2010 - Kev "Big Nose" McNally passed the ball in a try scoring passage of play.

A couple of beers with the oppo - awards MOM Phil and DOD Munch. They had to neck their beers with a little bit of DC's special sauce. And so back to the hotel and then on to Jonas beach bar for scoff and a courtsession. Here Doyley and Bilchy were on spanking form. The virgin's necked some shots, Brucky Senior, Chris and DC did pints for various transgressions (all contained a little lot of DC's special sauce - with various consequences) Funniest moment was when Chris required a glass of milky yoghurt to help him out " OH OH MY SEX IS ON FIRE"

And so into CasCais again for another long night of drinking. Nightmare pulled a David Gower look alike in the bogs of the John Bull pub, who then hung around calling Nightmare's bluff. On into the previous nights club where we whiled away the hours dancing, cavourting and romancing.

At 5pm we found a restaurant still open and availled ourselves of steak, egg and chips - handsome beats a keebab anytime.

Beddy byes at 6.30am. Out of room at 12 and across to the Piccadilly Circus for toasties and beers. Congrtulations to PJ for coming of age - not only did he take an old man's 40 wink power nap in the bogs but he also required Bruck Senior's magic indegestion remedy. Bilchy's bed was a conduit for some horizontal jogging activity as the giver benefitted from some medication endorsed by the great Pele.

The Last day of Tour always belongs to Tuckshop, as he eventually catches up with the rest of us. His I Shuffle Random 80's renditions were breathtaking and in the words of Piers Morgan "You know Tucky , you are really what Britain is all about". As Tucky became the Gift that Keeps Giving, I recount his opening chat up line to the young lady sitting next to him on the plane - " Hello, I'm Simon, Where are you from?" "Lisbon" "Oh, so that makes you a Lisbion then " Priceless, give or take a few vowels. She then proceeded to "sleep" for the rest of the flight.

The combination of fizzy euro pop, hot weather and a bunch of mates made for an excellent weekend, we did go at it hard, we won the game and were generally well behaved. Well done Ollie " Boys, Boys, Boys, Boys, Boys get tight Boys, Boys, Boys for a debreif, Boys,Boys Hey Guys listen up in tight, I just wanna say, Boys , Boys Boys, cough, cough, I just wanna say, Boys" Davies for organising the tour with the help of Sister Brown. Appreciated the sponsorship from Dave Carter's The Sheriffs Office, thank you and a big hand to Karen the rep who nursed us through the weekend really well despite Nightmare's constant attentions.

Good one boys, well done all round