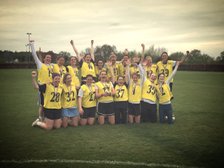 When two tribes go to war ..

The 2015 English National Women’s Championship match up pitted two regional champions against each other in what was billed to be a monumental match up with a spot at the 2015 European Club Championships, representing England, at stake.

Northern Premiership representatives Oxton must barely have any room left in their trophy cabinet, comfortably securing their spot in the Grand Final for the second year running by virtue of an undefeated season in the NWLA. They entered the match hot favorites as the reigning English Champions as well as four time victors in the European Championships. Putney on the other hand were playing in the national title match for the first time. The team in yellow were also yet to lose this season in the South East Premiership with the one blot on their copybook a draw with the ever competitive Blues back in October.

The spectators began gathering in the early afternoon with signs of tension and nerves visible in both camps as the players waited for the game to start. After a short interlude where the referees and ground staff debated whether the lamb one Putney family had brought along contravened the “no dogs’ rule (it didn’t) the match was finally ready to begin.

As always in lacrosse, draw controls are key and Putney managed to corral the first one and transition the ball into their attack, they felt the benefit just 46 seconds later as they tallied their first goal of the game with Rusty Cashman swooping across the fan and accurately hitting the back of the net. Any suggestion or thought that Oxton’s long journey to the Reading venue might have resulted in a slow start were quickly put to bed however as the team in purple hit back immediately, Ellie Jones and Alex Bruce combining at speed to beat the Putney defence and level the scores just 11 seconds later.

The teams traded goals as both defences struggled to neutralize their opponents “run and gun’ style of play and neither squad was able to establish a lead. With 15 minutes gone in the first half the score was 6-5 to Putney, the southerners being led by 2 goals from Cashman and 3 assists from New Canaan, Connecticut native Jenny Simpson whilst Oxton’s Sophie Brett, Alex Bruce and Liv Wimpenny had all managed to get on the board for the squad from the Wirral.

A superb solo effort from Indianapolis import Jessie Basch however spurred Putney into action marking the start of a three goal run that opened up some breathing space and the biggest lead of the game for either side at that point. Senior England International Charlotte Lytollis got one back for Oxton before Putney stalwarts Cashman and Michelle Goulty extended the lead once again to 5. Putney were not able to hold out the purple speed machines for long however and Oxton managed to tally 2 more in the final minute of the half and the teams went in the break with Putney ahead 11-8.

Passionate team talks were clearly being dispensed by both coaches/captains on the sidelines whilst most of the crowd were being entertained by the lamb which by this point had made a dash for freedom in the car park. Putney’s captain Libby Finch had clearly managed to instill some vigour in her yellow bibbed disciples as the South East Champs were first out of the block in the second half. Jenny Simpson and Jessie Basch once again displaying their telepathic connection to undo the Oxton defence as the latter tallied two more goals in the first 3 minutes. Putney seemed to settle into a rhythm, stretching their lead to 16-8 despite some excellent defence from the Northern side and a number of close quarter saves from goalkeeper Liv Brown.

Putney’s defensive unit had managed to hold Oxton scoreless for 14 minutes but they are too good a team to be kept quiet for that long and they soon were on a run themselves to demonstrate just that. Lytollis and Wimpenny both proving unstoppable on drives through the fan before Ellie Jones added a further two, halving the Putney lead to 16-12 with 12 minutes to play. Putney called a time out to try and stop the rot as the crowd volume increased, sensing an exciting end to the national title match was in store. The SEWLA team did manage to strike first after the break as Basch hit a cutting Eliza Watson who deposited the ball in the back of the net but the delay clearly hadn’t put Oxton off their stride and they continued to narrow the gap, with 10 minutes to play the score was a finely poised 17-15 to Putney.

As Finch implored her team to remain calm they once again restored their four goal lead, putting them in prime position with 8 minutes remaining but Oxton were determined not to relinquish their crown. The Putney defence, marshaled by England U19 coach Alex Carnegie-Brown in goal with a number of vital saves, repelled attack after attack including a potentially game saving interception from England International Watson, before their walls were breached again by Wimpenny and Bruce, the latter’s goal rippling the net with just under 2 minutes to play setting up a grandstand finale. Putney managed to secure the resulting draw and despite immense pressure, maintain possession as the seconds ticked down before the buzzer to ensure victory for the South East for the first time in this contest.

Final score was 19-17 to Putney who will now travel to Ghent, Belgium to participate as England’s representatives in the European Club Championships in September of this year.

The National Championship Club Game is new addition to the English Lacrosse calendar but the 2015 match was an exhibition of top level elite lacrosse from both teams. Commiserations to Oxton, there is no doubt that 4 times European Champions will be keen to avenge this result next year but huge congratulations to Putney, topping off a great season in style and showcasing just how competitive the South East league can be.

Many thanks to the organizer of the National Championship, Kate Nelson-Lee, the table staff and the four referees Giles Clark, Kate Clark, Paul Monaghan & Katelyn Hoffman as well as Rivers Ibis Club for hosting and everyone (lamb included) who came to support. A great day of lacrosse all round.