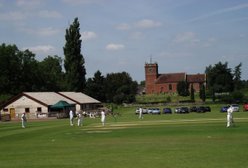 Founded in 1908 Quatt CC is a traditional English cricket club based in the heart of the rural County of Shropshire, located four miles from Bridgnorth, 10 miles from Kidderminster and within easy reach of the West Midlands conibation.

It has survived many years of good and bad times but has always come through and continued to give pleasure to cricketers of all abilities and backgrounds. The club has now established itself as the premier village side within the area not only in playing strength but also with its facilities too.

Like all clubs we offers both competitive and friendly matches depending on a players preference. The ground itself is one of the original village type grounds that you find dotted around the English countryside and offers that rural feel to the game, whilst also offering modern playing and training facilities. In 2012 our brand new state of the art pavilion was officially opened by Ashes winning Captain, Mike Gatting and this development has added a whole new dimension to the club.

In 2013 the 1st and 2nd XI's will compete in the Birmingham & District Premier League and the 3rd XI in the Shropshire County League. We also have a midweek team that plays in the Wilden Industrial Estates League and a friendly XI which plays the occasional Sunday game.

We have a successful Girls and Ladies set up with the Womens 1st XI promoted to the Midlands Womens Cricket League Premier Division in 2012 and we also have a 2nd XI playing in a couple of divisions below, thus catering for all abilities. Our Girls and Ladies section was established in 2001 and this continues to grow with players from all over Shropshire and the West Midlands now playing for the team.

Above all Quatt Cricket Club offers an enjoyable atmosphere and a sporting calender that can be thoroughly enjoyed by all who take part. We welcome all who would like to become part of our ever developing club.