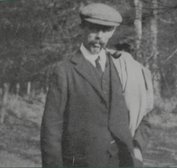 Although the Club traces its (more or less) continuous history from 1908, there are reports of matches being played by Quatt in the 1880's. It is understood that these games took place in Dudmaston Park, somewhere not too far from the Hall (pictured), the wickets would of course been unprepared.The Club was founded in 1908 by Captain G.C. Wolryche-Whitmore (pictured right), who took a great interest in it for over sixty years. It flourished until 1914, and then again for a short while after the First World War. The Club then folded for a few years until it was re-founded in 1936 by A.G. Mason.One of the early matches, perhaps the first one was between the 'Estate' and 'Village' - not an occasion that would be thought 'proper' nowadays. It is said that Captain Wolryche-Whitmore (then 55 years old) unleashed some ferocious strokes in partnership with J.F.A. Mason. The Club continued on satisfactorily until 1939 and the outbreak of the Second World War.

The Club got going again very quickly indeed in 1946, sooner than most in the area, and has continued ever since, undergoing the changes common to all Clubs which survived - better wickets, mown outfields and wider catchment areas. Some of the early games were real tests of strength in that it took so much effort to drive the ball through the longer grass of those times, with scores inevitably much lower than those today. An individual score of fifty was unusual until relatively recent times, and a Team score of fifty was often enough. In the early 1980's the team worked its way to the top of the Shropshire League culminating in winning the Division Two (Now Division One) Championship in 1983. In recent years the Club has re-established itself as one of the top village teams in Shropshire following a baron spell in the mid nineties where the club was within a whisker of folding. However, an influx of players from the local and surrounding areas meant that the club was able to field a 2nd XI for the first time in 2000, a Ladies team in 2002 and a third XI in 2007.

In 2003 the Club repeated the success of twenty years previous when they clinched the Division One Championship and acheived promotion to the Shropshire Premier League. They were the first village side in Shropshire to reach this level.

In 2008 the club celebrated its centenary with 3 male Saturday teams, a Sunday team, a ladies team, a Midweek team and a junior section. In 2010 the 1st XI reached the Quarter Final of the National Village Cup a magnificent achievement for the small village club.

At the end of the 2011 season Qcc will embark in a new era when the current pavilion, originally constructed in the 1930's, will be demolished and makes way for a new structure more suitable for the club in its current state.

In 2012 the club celebrated an amazing season with the construction of the brand new state of the art pavilion that which opened by former England Captain Mike Gatting. The season ended with the 1st XI clinching the Shropshire Premier League title and ensuring promotion into the Birmingham League. The Ladies 1st XI also won their division and were promoted into the top level if the female game.

If you are a past member and can offer more information about the history of Qcc or would like to donate any historic memorabila to our new pavilion please do not hesitate to contact us quattcc@hotmail.co.uk