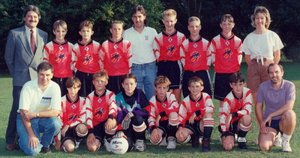 QWFC was formed in 1994, with just one boys under 14's team. It was started by Dave Mulrain and Ron Capper, who took on the roles of Secretary and Treasurer, positions they went on to hold for a further ten years. The Club grew under their control to the present day where we have over 400 members across 23 competitive teams of all ages, including girls sides and 5 adult teams.

In 2005 QWFC achieved FA Charter Standard Development Club status. This was the result of a great deal of hard work by Club officials and members who demonstrated that the Club met the exacting standards of management, training, vetting and organisation required by the Football Association.

QWFC were recognised at the Gloucestershire Football Association's annual awards evening when they were selected as the County winners of the FA Charter Standard Development Club Award.