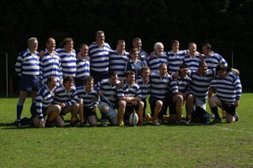 Racal Decca RFC began as the rugby section of the Decca Company Sports Club in 1959.

As like many large companies in the fifties, sixties and seventies Decca realized that sport was an important part of the well being of their staff and company owned sports and social clubs began.

Decca had their own social club in Tolworth where the majority of their workforce was based. The club had many activities, football, cricket, shooting, bowling, and much more, including rugby.

The Decca Company, a British gramophone manufacturer that, as Decca Records, released records under the Decca label famously turned down the chance to record ‘The Beatles’ and was a very large player in the electronics business, in the late seventies.

Racal, an electronics company, bought them in 1979 & was then known as Racal Decca.

Racal Decca opened up the social club to non employees during the early 80’s and the Racal Decca RFC flourished with new recruits going from strength to strength, carrying on the traditions and ethos of the club of being a very friendly and sporting side that was welcome to everyone of all abilities.

Friendships and rugby are all important to us and our survival on and off the pitch. We pride ourselves on having fun, playing for the love of the game, the discipline it instills and respect it teaches.

Touring is a special time and over the years we have spread these ideals to the four corners of this country and beyond, including France, Poland, Spain, Czech Rep, Holland, Portugal, Germany and many more.

Through the years Racal Decca RFC has gone through ‘boom and bust’ but always has managed to pull through the hard times, and this is due to the love of the club by the members old and new.

Our spiritual home is a now a Goals five a side football centre who have developed the site knocking down the original club house and installed all weather sports facilities.

Since 2001 there are no longer any rugby played throughout the regular season on this site and we have moved to Kingston University’s Tolworth Court pitches next door.

However for the last 8 years we have returned for our final game of the season, the now well established, end of season testimonial celebrating our members whose playing journeys are coming to an end.

This gives us the opportunity to reunite old friendships, celebrate our members past and present whilst providing our younger players with a greater sense of the history of the club.

Our move to Kingston Uni’s neighbouring facility has not stopped the club increasing its playing membership managing 20 plus games a season.

Long may it continue.